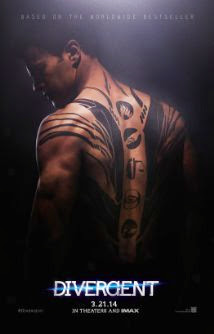 Written By: Evan Daugherty and Vanessa Taylor (screenplay), Veronica Roth (based on the novel by)

*Spoilers for people who haven't read the books.*

You guys...Divergent has easily been the best book to movie adaptation that I've seen in a really, really long time. Let me just put that out there immediately.

The actors: Shailene Woodley (Tris), Theo James (Four), Kate Winslet (Jeanine), Ashley Judd (Natalie, aka Tris's mom), Jai Courtney (Eric), Zoe Kravitz (Christina), Maggie Q (Tori), and Tony Goldwyn (Andrew, aka Tris's dad) all did magnificent jobs. I felt like Shailene and Theo especially were perfect for these roles. They were both how I pictured Tris and Four while I was reading Divergent, and they never once acted out of character. Truthfully, that's hard to find. I loved the chemistry that Shailene and Theo had while Theo also maintained Four's standoffish feel through the beginning of the movie. Their relationship felt legit. Shailene's best acting scene was when Tris lost her mother during the Dauntless attack on Abnegation. I teared up during that scene because her grief felt so real. You guys know I'm not a crier, so that's a small victory in and of itself.

As always there are differences between any book and movie made based upon a book. The biggest differences that I noticed involved the widespread knowledge that Divergents exist at all. In the book, the only people who seem to know about Divergents are those who are Divergent themselves, ones who have family members who are (or were) Divergents, and Jeanine. It was slightly confusing to me as a viewer why Tris didn't know any details about what being Divergent meant when the knowledge that Divergents exist at all was fairly widespread. I feel like the moviemakers made this decision in order to help along the viewers who may not have read the books.

I was almost sad to see how little screen time Al was given. I don't know that we'd even been told his name when the major events involving him took place. I figure his scenes were probably cut for budget and timing purposes, but I was sad that we didn't see more of him and his struggle to become Dauntless. Four tells us that he was failing, but even if they'd simply told us his name and flashed to his ranking on the scoreboard we could have figured that out. Similarly, Molly is shown and there are a couple of scenes with her, but I don't think we were ever told her name in the movie.

Probably for me, the most deviations revolve around Jeanine. She was a lot more present than I remember her being in Divergent, but I'm assuming that's because you don't hire an actress like Kate Winslet and not give her any screen time. PLUS I imagine the bigger reason being that because Jeanine's so present in Insurgent, she needed to be firmly established as "public enemy number 1."

Another addition the moviemakers made but that I actually think made more sense involved the mirrors in Tris's simulations. It seemed to me like Tris being able to look at her own reflection for any length of time is what usually woke her up to the fact that the simulations weren't real. And I liked how the moviemakers pulled that in from the first scene of the book and made Tris's relationship with her own reflection have a deeper meaning and purpose.

However many deviations there were between the book and this movie, I wasn't upset with any of them. Everything felt so much better with Divergent than with the other book to movie adaptations I've seen recently. The actors. The locations. The special effects. The smart decisions on what should be changed and what should remain the same. The marketing strategy. The overall feel of the movie. They just did so much right with this adaptation, and I can't thank the director and producers enough for doing a worthy job of this book.

I wanted to spend some time addressing other specific scenes that I enjoyed so much, but when I started naming them in my head I felt like I was essentially naming all the scenes. HA! This is definitely one that I'll pay to see in the theater twice, and I can't wait to see them make Insurgent since there's not a doubt in my mind that they will. Divergent gets 4.5 Stars from me. Have you seen it? What did you think? Let me know!

P.S. I've reviewed Divergent twice on my blog. Here is my original review and here is my 2nd review.

Posted by Somewhere Only We Know at 8:58 AM