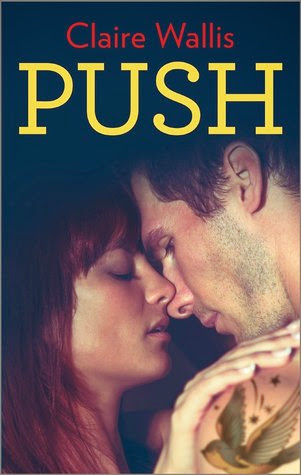 Goodreads description--I feel like I am wrapped in a cyclone. Everything is whirling around me, drawing the air out of my lungs and filling me with the best kind of turmoil. Every time his tongue slides against mine, a prickle in my gut tells me how right we are together. How much I need David. How much I need us.

I hope the cyclone never stops.

Emma Searfoss has spent a lifetime trying to escape her abusive stepfather. It's why she moved far away from home. It's why she's kept no ties with her remaining family. And it's why she's got a major rage problem. When her neighbor shows up to fix the kitchen in her new apartment, his enigmatic charm calms the fire in her. David is cool and collected, and he makes Emma feel safe for the first time ever. But David has his own chilling past—his six previous girlfriends have all disappeared without a trace. Emma's walking a dangerous line, but David's pull is intoxicating. And impossible to resist…

This is a new adult romance with mature content for readers 17 and up.

So Husband and I have been watching Dexter on Netflix, right? And we literally just finished Season 4's finale about the same time that I was around the 70% mark for Push. Season 4 has an epic finale and despite wanting to return to Push to see how it all ends, I needed to see Episode 1 of Season 5 for some closure on Season 4's ending. Wow. Just wow. I say all of that to say that I saw some similarities betweenDexter and Push.

Without giving too much away we know from the description that David's previous six girlfriends have all gone missing. That's a pretty huge coincidence. When I initially read the book description my first thought was "well there has to be something going on that we don't know about that would explain this." But as Sherlock Holmes says, "There is nothing more deceptive than an obvious fact." So when I started Push and the prologues (both Emma and David's) were set at a specific event in the future, I was discouraged. Emma's prologue didn't set her up to be a character that I was excited to be reading about. From the prologue she seemed too passive. And David's prologue...well I'll just say that it left me feeling like I was reading about a train wreck--slow and steady, but headed toward an unavoidable, deadly conclusion. And one that I wouldn't be excited reading about. Initially, I felt like the prologues set me up to dislike this book and these characters.

Yet, I still felt like I must be missing some pieces to the puzzle. "There's something I'm missing," I kept repeating. It felt like Claire Wallis was giving me too much information and thus I began to question the information I was given. You know that feeling where all the evidence points in one direction and you have to wonder if the obvious conclusion is just well...too obvious.

Another Dexter-like quality was Emma herself. She reminded me a lot of Deb, Dexter's sister. She's all harsh edges and foul language. Emma had a rough childhood. Her father died when she was young, and her mother pretty much married a loser who made it his life's mission to make Emma's life miserable. Now living on her own and working, Emma's trying to move on from her past. She has issues, but I connected with her. She tries so hard to never be vulnerable, but David comes in and worms his way under her protective shell.

David shows up claiming to be the apartment complex's handyman to fix her kitchen. And well he keeps coming back. He somehow manages to get inside her apartment multiple times without Emma actually opening the door for him. He's got an air of mystery around him. And because of the prologues, I was constantly wondering how truthful he was being with Emma even though he seemed genuine.

Claire Wallis periodically includes a chapter from each of David's previous girlfriends as well as flashbacks to Emma's past. These parts were initially frustrating for me because they took me away from the present, and Emma and David's building relationship. Yet these chapters proved to be so valuable and shaped the way I thought about the characters, the current events, and the inevitable conclusion. The more I read and the deeper I delved into these chapters, the more I recognized patterns of similarities as well as contrasts between David's past girlfriends and Emma.

Overall I was impressed with Claire Wallis's decisions. She did a good job weaving hints into this book. She repeated descriptions in a way that wasn't annoying as they can sometimes be but instead as a clue. She foreshadowed nicely. And she does a great job of tying all of the pieces together from start to finish. I highly advise paying close attention to the wording when you're reading this one. Also, remember how I mentioned that the prologues initially had me dreading what was to come? The further I read into Push the more I realized that the prologues were perfect because they offered a reference point for all of the information to come which added an air of mystery to this story when I initially thought they were too revealing. Bravo, Ms. Wallis!

I will say that while certain scenes weren't too graphic, you definitely don't wonder what's going on. That and Emma's (I keep wanting to call her Deb, you guys! Dexter!!! *shakes fist at the TV*) crude mouth were borderline for me. Not quite too much, but I could have done with just a little less at the same time. But that's a personal preference.

But now...now, he is taunting me, bringing me close and then pulling back.

"...he did look more like a man with food poisoning than a man in love..."

The idea of David ironing is an absurd turn-on.

"They let the bottom drop out. Or maybe they even caused it. But I am not them."

And, of course, my favorite quotes are spoilers, so I'll keep them to myself. Also, be aware that this book does appear to be the first in a series. I'm not sure how many books are intended, but I'm assuming at least one more since "to be continued" was at the very end--there better be at least a second book. I need more.

Push gets 4.5 Stars. I debated on just giving it 4 Stars, but this book has stuck with me. This is as close to a book-hangover I've had in a while. Maybe it has something to do with that traumatic Dexter season finale coming at the same time as this book. Don't be too judgemental with the prologues. They might seem to give too much away, but they're necessary and just right the way that they are. Please check out Push if you haven't.

Have you read Push? What did you think? Let me know!