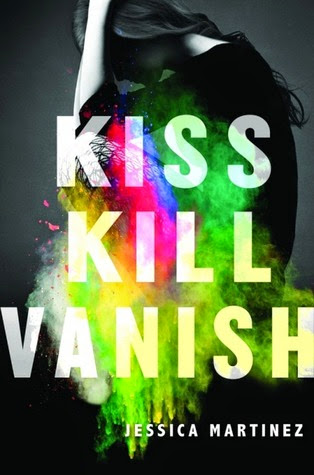 One moment, she was wrapped in Emilio’s arms, melting into his kiss. The next, she was witnessing the unthinkable: a murder in cold blood, ordered by her father and carried out by her boyfriend. When Emilio pulled the trigger, Valentina disappeared. She made a split-second decision to shed her identity and flee her life of privilege, leaving the glittering parties and sultry nightlife of Miami far behind.

She doesn’t know how to explain to herself what she saw. All she knows now is that nothing she believed about her family, her heart, or Emilio’s love, was real.

She can change her name and deny her past, but Valentina can’t run from the truth. The lines between right and wrong, and trust and betrayal, will be blurred beyond recognition as she untangles the deceptions of the two men she once loved and races to find her own truth.

I requested Kiss Kill Vanish over a year ago. I wasn't familiar with the author, Jessica Martinez. Based solely on the description, I decided to give this one a go. However, before I got a chance to pick it up I saw a couple of bloggers that I follow give it fairly low ratings. Honestly, it's been so long and I didn't read their reviews that I can't even remember who it was. So that put a damper on my excitement to read Kiss Kill Vanish. That being said I put off reading it. Until now. But the good news is that my expectations were lowered so that Kiss Kill Vanish really exceeded them. I didn't even re-read the description when I decided to pick up Kiss Kill Vanish. I just knew that it was way past time that I gave it a shot. And I'm glad that I did.

When I first started the book, I found that none of the characters really sparked much to like about them. I did connect to Valentina's fear and loneliness. Plus her desperation to make money. Her relationship with Lucien was really weird to me. She definitely resented him. It seemed as if he gave her the creeps yet she didn't respond to that in a way that I understood. Aside from Lucien and one of her roommates, Nannette, Valentina is pretty much secluded in her hiding. Lucien's brother, Marcel is there in the background and it was easy to see that he and Valentina might be able to develop a love/hate relationship.

Surprisingly, Emilio (Valentina's once boyfriend) makes an appearance in the very place that Valentina is hiding out. Desperate to know if there's an explanation for what she witnessed, Valentina allows Emilio a chance to explain. Like most romances, it's often easier to swallow a bunch of bull when you're in the presence of the one feeding it to you. Surely someone who claims to care about me so much wouldn't lie so directly to my face. But things start to go from bad to worse, when after Emilio leaves Lucien is found dead from "suicide." Valentina can't trust anyone. I did enjoy how Valentina is naive without being an idiot. She might have been oblivious to her father's true self and business, but once she's exposed to the possibility of life not being what she once thought, she opens her eyes and begins to question everything. Sometimes she wants to believe the best even when intuition and logic are telling her the worst. She's not perfect when it comes to listening to herself, but she's not completely ignorant and unseeing at the same time.

Valentina and Marcel have such a slow building relationship. From barely being able to tolerate each other's presence, to their shared grief and guilt over Lucien's death, to an uneasy friendship, to maybe more--at least on one side. I really thought this was handled so well.

Obviously, due to Valentina witnessing her father order her boyfriend to commit murder, something is off in her life. Things aren't as she's always believed them to be. What is her father and boyfriend involved in? While the mystery of this was something I enjoyed and found relatively believable, I didn't quite enjoy Valentina's involvement in the resolution of this aspect of the book. It felt highly unrealistic.

-Emilio. Emilio is perfect. Emilio is slippery. He's always what I need him to be, except when he's what my father needs him to be...

-I'm not under the illusion that I'm winning anymore.

In the end, Kiss Kill Vanish was nothing that I was expecting it to be. It was a much better read than I was expecting. However, I don't know that it's a book that will hold up to much over-analyzing. I liked Valentina's questioning mind. But perhaps my favorite aspect is the slow building relationship between Valentina and Marcel. At the same time, I felt like aspects of the resolution were completely unrealistic. Ultimately, Kiss Kill Vanish gets 3.5 Stars from me. Have you read Kiss Kill Vanish? What did you think? Let me know!