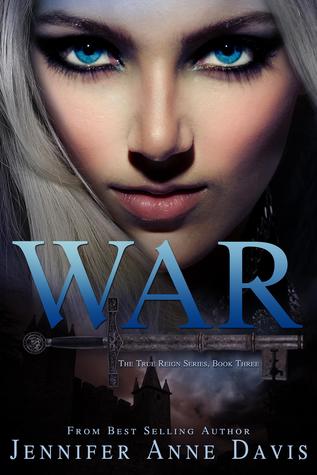 So I completely blew through The Key and Red. Both books captured my attention and held it. I was invested in the characters and the story. Both books also end in a cliffhanger. I really liked the cliffhanger for The Key. It was one of those that spurred me on to keep reading and find out what happens next. I guess while you don’t fully know what happens, you can guess. And your guess would probably be something more along the lines of a positive outcome for the characters I’ve grown attached to. That was a slightly different experience from the cliffhanger for Red. With that one, I ended up feeling a bit frustrated. So I guess what I’m saying is this made me realize that while I don’t hate cliffhangers in general, I do feel quite differently when the impression given is one of a positive outcome versus one of a negative outcome. My point in all of this is that Red’s ending did not leave me in the best frame of mind for starting War. I’d also marathon read the previous two books (90% of The Key and 80% of Red in one day). So I was slightly exhausted when it comes to reading when I started War.

The events of War felt very similar to what I’d just read in The Key. Rema’s been essentially kidnapped by the Emperion assassin (she was basically kidnapped by Lennek in book 1). She’s going to go before the emperor to face public execution (which is also what happened in book 1). Darmik has to find a way to save her (granted he wasn’t sure if he wanted to save her in book 1, but still). While the circumstances surrounding the two books are a good bit different a large section of the story and plot was on repeat. And like The Key, I also felt like some aspects of War that were supposed to be twists or surprises were actually fairly obvious. And there are some other aspects that end up being repeats of the previous two books, but to get into those would be spoilers. So I’ll refrain.

Even though Rema and Darmik spent a large portion of time apart in the previous two books, I felt differently about their separation in those books than I did in War. Because in a lot of ways it felt like the two were making progress towards each other even when they were apart in the prior two books. Of course, the two do come back together in War but it just had a different feel to me.

Ultimately, I didn’t love War as much as the previous two books. It felt pretty long to me. Considering it took me less than 36 hours to read the first two books and more than a week to read this one. Even though my review focused on the negatives for me with this book, I still enjoyed the book and the series overall. This series was my first experience with Jennifer Anne Davis, and I’ll definitely be checking out more of her work in the future. War gets 4 Stars from me. Have you read War? What did you think? Let me know!