Four Days of You and Me - Review 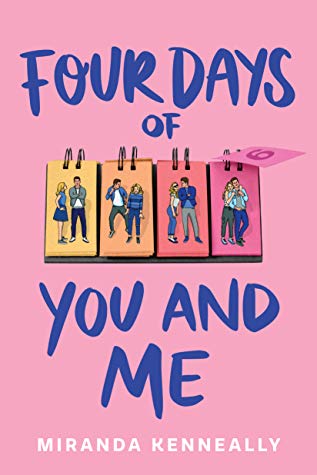 Four Days of You and Me

Every May 7, the students at Coffee County High School take a class trip. And every year, Lulu’s relationship with Alex Rouvelis gets a little more complicated. Freshman year, they went from sworn enemies to more than friends after a close encounter in an escape room. It’s been hard for Lulu to quit Alex ever since.

Through breakups, make ups, and dating other people, each year’s class trip brings the pair back together and forces them to confront their undeniable connection. From the science museum to an amusement park, from New York City to London, Lulu learns one thing is for sure: love is the biggest trip of all.

Miranda Kenneally and I have had a rocky relationship. Of course, she's completely unaware of this--our relationship or the rockiness of it. Some of her books I've loved and others I've straight hated. So I wasn't sure how I was going to feel about this one. One thing has become clearer and clearer to me and that is that Miranda Kenneally's books tend to have a political agenda. And I can 100% say that I despise this. Write stories that feel authentic and stop trying to go through a checklist of current political issues to address.

I very nearly DNF'd Four Days of You and Me very early. Clues were dropped that Max, Lulu's best friend, was gay but I decided to wait things out until it was confirmed. And then by the time it was confirmed, I felt too invested in Lulu and Alex. My issue comes from how it seems almost impossible in YA literature today for best friends of the opposite sex to be anything but in love with each other or one of them to be gay.

I almost felt like Miranda Kenneally made Lulu be a political activist as a means to cover all of these issues that she wanted to be sure and touch on. But perhaps the most frustrating thing for me with her books and characters has always revolved around her portrayal of Christians. In this case, there was only mention of characters that go to church. Yet there's a feeling I get any time she mentions these characters. A hostility. Or maybe a passive-aggressiveness. Or just the impression that she views all Christians or "church-goers" as hypocrites.

I liked Lulu despite her constant political causes. She's working on a graphic novel and I always enjoy seeing pieces of the publication process. Her rollercoaster ride of a relationship with Alex felt so realistic to me. And that's one thing I feel Miranda Kenneally does really well in her books. Alex was more enjoyable to me but I find myself feeling this way about the male leads often. It could simply be the difference in who is narrating. But I often feel that way with dual narration books too.

Being from Alabama, I've visited Six Flags over Georgia many times in my life. Granted the last time I visited was when Husband and I were dating so that was over 11 years ago. But some things mentioned about the theme park were just flat out wrong. The Scream Machine does not have any loops or places where it goes upside down. It is an old wooden coaster that was built in 1973. One of the--it not the oldest--coasters left at SFOG since the Cyclone was torn down and replaced. Goliath was mentioned that your feet dangle and this is only partly true. There's still a floor beneath your feet--unlike Batman--but you are sitting in bucket-like seats that do allow your feet to dangle a bit. It really takes minimal research to get these minor details correct. I mean I know probably the majority of readers haven't been to SFOG and won't know the difference, but for those of us who have, it's a little discouraging to see these inaccuracies. And it's ironic because Lulu mentions taking notes on their trip to London about things she might need to reference again if she ever decided to write a story in that setting. I mean a park map would have told you the Great American Scream Machine does not go upside down. A few other small things didn't line up with my experience or knowledge of the park. But I think I've proven my point.

When all is said and done, Four Days of You and Me was a mixed bag. On the one hand, I liked the characters and their stories. I liked Alex. I liked Lulu. I liked most of the side characters. The story felt authentic to teenagers of today. But what didn't feel authentic was the constant political causes that Miranda Kenneally included. And I say this not because Lulu was a political activist but because Miranda Kenneally has included these types of things throughout several of her books. I also don't enjoy the hypocritical way she portrays Christian characters or any character that "goes to church". Even though it is clear to me that Miranda Kenneally knows how to write and craft a story, I don't believe I'll personally be reading any more of her books in the future as I'm sure she's not going to back off including these aspects in her work. Four Days of You and Me gets 3.5 Stars from me. Have you read Four Days of You and Me? What did you think? Let me know!

Email ThisBlogThis!Share to TwitterShare to FacebookShare to Pinterest
Labels: 3.5 Stars, Contemporary, Four Days of You and Me, Miranda Kenneally, Young Adult