You Deserve Each Other - Review 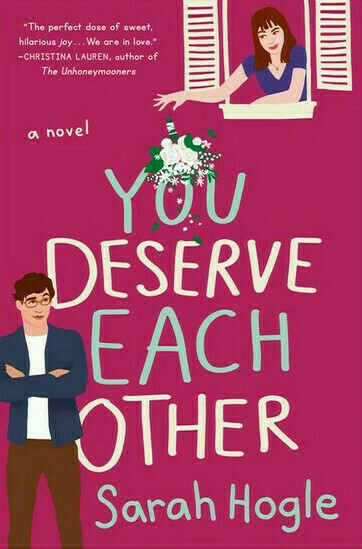 I couldn't remember the book description when it came time for me to read this one. I have battled reading slumps all year so far. Hangovers from exceptionally good books as well as slumps from exceptionally mediocre books as well. I wasn't sure where You Deserve Each Other was going to fall. And truth be told, I went through a range of thoughts while reading this one.

My first thought was how incredibly sad it was that Naomi resigned herself to a life with so little to look forward to in it. And that was quickly followed up with thinking it completely unrealistic for someone to stay in a relationship with someone else simply as a matter of pride. I mean who has that much pride. But then I began to realize that people I know have stayed in real relationships for a whole lot less.

Once Naomi and Nicholas offer each other the smallest amount of honesty--that they are each miserable--the fun begins. These two embark on a quest to make the other break first. They begin to prank each other which alternated between being sad for them and thinking they were both hilarious. What really happened was that the two of them came alive in their attempts to break the other down. A fire was lit and fanned into flame.

I sensed hope from Nicholas early enough to feel confident in how he felt about Naomi. Naomi slowly began to realize her own selfishness. She began to see how much she was holding back from Nicholas which ultimately didn't give him a chance. These two had some simmering moments even though the description was much tamer than I wondered it might be.

Ultimately this is a story about fighting for love, putting in the necessary work and effort to put each other first, to maintain your relationship. It's a story about second chances and falling in love so much deeper than the first time. It's funny and sad. Heartbreaking and hopeful. You Deserve Each Other was so real that I think almost everyone will be able to relate to the challenges of falling into a rut and letting little things build up until they threaten to drown you.

Too many of my favorite quotes:

- This is how I’ll die: slightly unwilling but ultimately lazy.

-“There’s a difference between being needed and wanted. In some things, I like to be needed. With sex, I need to be wanted. I can’t be just some guy in your bed getting the job done. I’m not having disconnected, going‑through‑the‑motions sex with you. Not you. You’re supposed to be the person I connect with the most deeply.”

-“You stopped seeing me, Naomi. You stopped wanting me. You’re going to figure out one of these days that I can tell when you’re starting to disassociate, and it’s the most heartbreaking experience I’ve ever had. It’s nonstop. It keeps on happening. I try to bring you back to me every time you go to leave, off into your own head where I’m not allowed.”

-Real Nicholas hasn’t said any of this. But Imaginary Nicholas is an amalgamation of realistic predictions based on callous things he’s said to me in the past, so I easily hear his voice shape those words. It’s not fair to be hurt or angry over something he didn’t even say, especially since the words I put into my own head are all true, but knowing he potentially could say it— and probably will— is enough to make me sink into a dark silence that I don’t rise from for the rest of the ride home.

-"I want to please everybody, but I can’t, and in somebody’s eyes I’m always falling short. Don’t put me in this position where I have to choose.” I never make him choose, but he always does, anyway, which puts me in a position where I’m forced to be crabby.

-It feels like he’s always leaving right when I want him to stay.

-It should be a given, but it’s not, and that’s my fault. I’ve been withholding nice gestures to punish him for not giving me enough nice gestures...

-Keep doing this even if he doesn’t reciprocate in an immediately obvious way.

-I have to give while expecting nothing in return; otherwise, the gestures are empty.

-But when your significant other says, You don’t need to work. You don’t need a job, you might hear, I don’t think you’ll find meaningful employment without a college education. I don’t believe in you. In my head, I’ve been assuming that when Nicholas says I don’t need to work, what he means is that any job I’d qualify for is so beneath his notice that I might as well not work at all. In Nicholas’s head, all he’s done is say Here I am, here I am. Be anything! It doesn’t matter if you don’t make much money, because I’ll take care of you. I’ll let you need me. I’ll be your rock, whatever happens. Spread your wings, you can always fall back on me.

-It feels so lovely to be good to each other.

-We’re going to have to choose each other, over and over, and be each other’s champion, never letting ourselves forget the good whenever we’re stuck in a patch of bad. It’s going to be work.

Email ThisBlogThis!Share to TwitterShare to FacebookShare to Pinterest
Labels: 4.5 Stars, Adult, Contemporary, Sarah Hogle, You Deserve Each Other