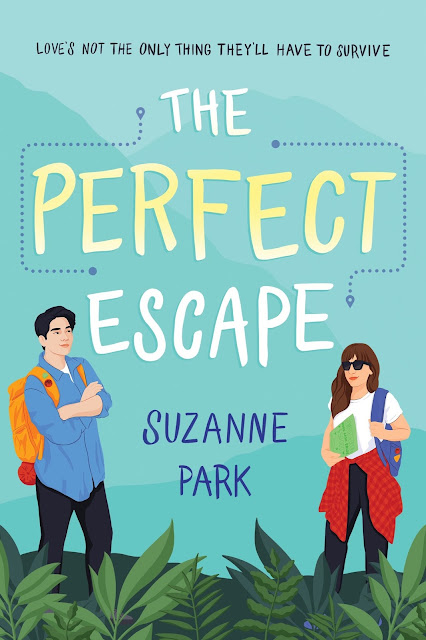 Goodreads description--Love is a battlefield in this hysterically funny rom-com debut, perfect for fans of Jenny Han.

"Pure fun! A hilarious rom-com that head-fakes you into tumbling headlong into a techno-zombie survival thriller propelled by banter and plenty of heart."―DAVID YOON, New York Times bestselling author of Frankly in Love

Nate Jae-Woo Kim wants to be rich. When one of his classmates offers Nate a ridiculous amount of money to commit grade fraud, he knows that taking the windfall would help support his prideful Korean family, but is compromising his integrity worth it?

Kate Anderson wants a fresh start, away from her controlling father. She fantasizes about escaping to New York, where she can pursue her dreams. But how can Kate get there when she can't even buy dinner without his approval?

Worlds collide when Nate and Kate meet at the zombie-themed escape room where they both work. As sparks fly, fate steps in: a local tech company is hosting a weekend-long survivalist competition with a huge cash prize that could solve all their problems. The real challenge? Making it through the weekend with their hearts intact...

I finished The Perfect Escape last night, and I'm finding it hard to put my thoughts into words.

Let me start with Nate. I liked Nate. He's a scholarship kid at a fancy school. He's an older brother. He's a bit nerdy but doing everything he can to create a good college application resume for his future. His family is a bit on the poor side. His mom's car doesn't have fully working AC. His dad is always trying to do their home repairs himself. He's in quite a lot of activities and classes. Krav maga being one of them and he works at an escape room place.

Nate has had a crush on a friend of his for a while, but it's obvious that she always chooses the wrong guys. Nate's bullied quite frequently by the rich kids at school. One I particular. I'm not advocating violence, but I would think, given his krav maga skills, Nate would be bullied and pushed around a bit less. He meets Kate at work. And quickly develops a crush on her.

Kate's mom passed away recently. Since then, her father, although mostly absent, has been extremely strict and limiting. Her house is monitored by security systems as well as a robot Nanny of sorts. She's so oppressed by his rules and absence that she devises a plan to escape his house. Part of that is getting a job to save her own money. But she needs more of it quickly. So she convinces Nate to partner with her in a "zombie survival" game where the prize is $50,000.

I liked The Perfect Escape. It didn't take too long for me to feel invested in the characters and story. But I had a few issues. Most of them were minor. I didn't feel like the interactions we see as a reader were enough for the characters to make it to love. An extreme like of each other, sure. But not quite to love. I already mentioned my issue with Nate being bullied. Annie, Nate's friend that he used to have a crush on, didn't feel right to me. I would have found her involvement more believable had she liked Peter and been used as yet again falling for the wrong guy. Kate's father was a bit much too. A good step beyond believable to me. And I found it difficult to understand how he could account for so many little things and not question her coming and going (like to her job).

All in all, I enjoyed The Perfect Escape. It was a quick and fun read. Light. And my issues were really quite minor. I guess my biggest downside is that I'm not sure by the end of the year if I'll remember much about this book, the characters, or the story. I think it qualifies for 3.5 Stars. Have you read The Perfect Escape? What did you think? Let me know!