All Things Halloween Review - A Court of Frost and Starlight 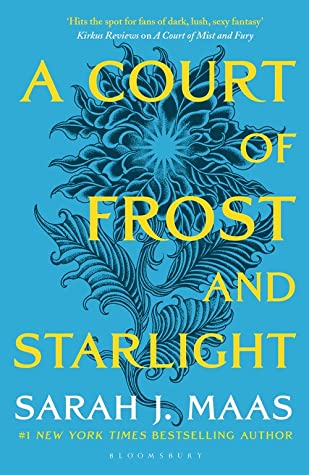 Goodreads description--In this companion tale to the bestselling A Court of Thorns and Roses series, Feyre, Rhys and their friends are working to rebuild the Night Court and the vastly changed world beyond after the events of A Court of Wings and Ruin. But Winter Solstice is finally near, and with it a hard-earned reprieve. Yet even the festive atmosphere can't keep the shadows of the past from looming. As Feyre navigates her first Winter Solstice as High Lady, she finds that those dearest to her have more wounds than she anticipated – scars that will have a far-reaching impact on the future of their court.

Sarah J. Maas is a global #1 bestselling author. Her books have sold more than nine million copies and been translated into 37 languages. Discover the sweeping romantic fantasy for yourself.

Originally, I decided I wasn't going to read A Court of Frost and Starlight. Really, I've just grown tired of novellas. For a while, it seemed like every author was releasing tons of mini-books, novellas, in each and every series they ever wrote. And on one hand, sometimes an avid fan of a series wants to read every scrap of detail the author is willing to release. Yet on the other, it just gets to be too much when every author is releasing multiple novellas in every series. It can become impossible to keep up. SO...I'd decided to skip this one due to my original slight disappointment with the ending of A Court of Wings and Ruin. Also, if I remember correctly, Holly stated in her review of this one that she didn't see the point in it because not much happened. Since my second reading of A Court of Wings and Ruin left me feeling better about the ending and the series overall coupled with the knowledge that book 4 should be released in 2021 as well as the elibrary having this one available immediately, I decided to finally break down and read this one.

I was bordering on agreeing with Holly in that not much conflict happened within A Court of Frost and Starlight. More than anything, the conflict was really there to set up for the upcoming book, A Court of Silver Flames. She's not wrong. But I also find myself somewhat annoyed that a series has to always face some big, bad, seemingly-insurmountable conquest or villain to be taken down. Sometimes, I just want to read and enjoy everyday characters who want love and life and family. So I wasn't disappointed that there wasn't some massive conflict to overcome in this novella.

Sarah J Maas used the multiple narrator technique in this book that she's used in her Throne of Glass series. This is where nearly every main character has chapters or sections from their perspectives. Truthfully, I was surprised and impressed that she limited the prior three books to Feyre and Rhys only. I will say that I utterly dread reading any Mor chapters in the future. I skimmed the chapters she did have in this novella. I'm so utterly ticked off at her treatment and using of Azriel over the last 500 years that I just can't stomach being forced to read from her as the intention is often to create a connection between the reader and the narrator and often develop an understanding of their motives and actions. I care zero percent at trying to find a way to relate to her or understand or excuse her decisions and cowardice.

I also need to address how sorry I feel for Lucien. It seems to be more and more apparent that SJM plans for Lucien and Elain to be one of those couples that the mating bond chose incorrectly on. I'm torn because if there's some magical, destiny type of reason for pairing two individuals together, I want that to be infallible. Having the mating bond sometimes chooses incorrectly creates doubt for all couples who it chooses (well obviously Rhys and Feyre have proven their own relationship was chosen correctly, but any other relationship is uncertain). I foresee doom for them, and I hate going into a storyline predicting no hope.

Nesta and Cassian....that is a different story. Nesta is in a bad place for sure. I foresee hope for the two of them despite the terrible mind space Nesta is currently in. It reminds me of Feyre and Rhys. I can't wait to dive into more of these two.