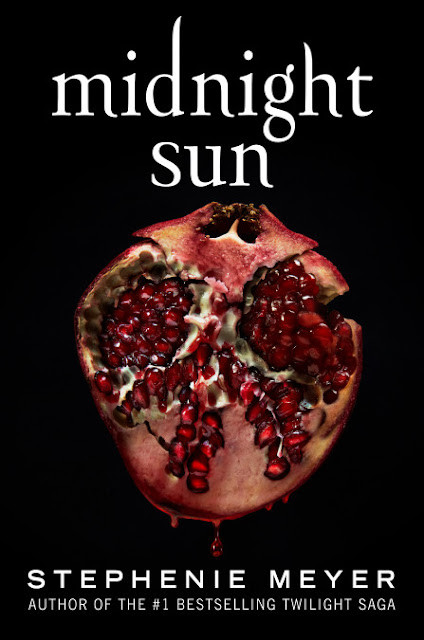 Goodreads description--When Edward Cullen and Bella Swan met in Twilight, an iconic love story was born. But until now, fans have heard only Bella’s side of the story. At last, readers can experience Edward’s version in the long-awaited companion novel, Midnight Sun.

This unforgettable tale as told through Edward’s eyes takes on a new and decidedly dark twist. Meeting beautiful, mysterious Bella is both the most intriguing and unnerving event he has experienced in his long life as a vampire. As we learn more fascinating details about Edward’s past and the complexity of his inner thoughts, we understand why this is the defining struggle of his life. How can he let himself fall in love with Bella when he knows that he is endangering her life?

In Midnight Sun, Stephenie Meyer transports us back to a world that has captivated millions of readers and, drawing on the classic myth of Hades and Persephone, brings us an epic novel about the profound pleasures and devastating consequences of immortal love.

Sigh! I just finished Midnight Sun. I know you guys know just how long I've waited for this book because most of you have waited as well. I was talking to my friend, Amanda, about the release and she was telling me that she feels like she's moved on and doesn't really want to go back to Edward and Bella. I can completely understand that. I mean how many books have I read in between my first reading of Twilight? I can't even be sure because I wasn't keeping track of what I was reading in any kind of way back then. But for me, knowing that Stephenie Meyer intended to publish Midnight Sun and hadn't done so (we all know the story of why) left me without closure. Sure, I read the version that was released. More than once. And loved it. So when I heard she was finally publishing this long-awaited book, I was elated. For her, and for myself and all of the other readers who had once waited expectantly for this book and long ago gave up on the idea. So there was never a question for me about whether or not to read this book. And honestly, I'm glad that I did. It was everything I hoped it would be and more.

I was telling my husband that between the two, I think Edward has a more interesting story. Of course, Bella is relatable. She's the clumsy, high school girl who falls for the wrong guy. Who can't relate to that? But Edward's story is so much more complex given his ability to read minds. He has to react to everything that people are thinking and not just saying. This is one of the reasons why Midnight Sun is so much longer than Twilight. Not to mention his vampire brain that can think and act in a shorter amount of time than a human one so he's able to accomplish more thinking and more doing in between the actions of the same scenes from the original text.

The thing that hit me the most, that perhaps I enjoyed the most, was how much more complex Alice's and Jasper's talent were. For some reason, I seem to have been under the impression that Alice only saw two visions under any given situation. Two different outcomes based upon any single decision that is made. But that's not the case. She sees many more pathways than I could have fathomed, which actually makes more than just two simple paths. Because we make infinite small decisions constantly and the futures she sees aren't just influenced by one person's decisions. Jasper also had a much more active role in using his talent and in a more complex way than simply making Bella feel calmed down in anxious situations. I appreciated this and felt like I'd done him a little bit of a disservice in my prior readings of the series. But I'll leave you to explore that on your own.

I am sure that the original illegally released section of the book was edited, added to, and all that but I didn't feel much like it had been. I didn't notice much additional content so I was anxious to get past the place in the story where the original illegal release ended. Looking back on it, the number of pages definitely increased so I know additional content must have been added.

I know many people took issue with various character traits of both Bella and Edward. But I never minded those details and so even though I could see Stephenie Meyer amping up the amount of self-deprecation Edward feels for some of his behavior, I never felt like it was necessary. Yet the addition of his constant putting himself down because of what he is and his obsession with Bella felt in line with what I already knew of his character. I wasn't expecting how frequently and thoroughly he was devoted to his plan to leave which we know he does in New Moon. I guess I was fooled the same as Bella when he said he would stay. This was the only time I was really miffed with him. I would have preferred for him to have changed his mind when the events that spurred him to leave in New Moon occur as if he yet again changed his mind to what he'd always thought would be required of him rather than for him to be biding his time until he felt it was the right moment to leave. Planning to leave all along leaves a bad taste in my mind.

-I struggled to find words to name the feelings that flooded through me, but I had no words strong enough to hold them. For a long moment I drowned in them. When I surfaced, I was not the same man I had been. My life was an unending, unchanging midnight. It must, by necessity, always be midnight for me. So how was it possible that the sun was rising now, in the middle of my midnight?

-I'd always envied Carlisle's perfect control, but at the same time, believed it was impossible for me to duplicate. I realized now that I'd chosen the lazy way, the path of least resistance, admiring him greatly, but never putting in the effort to become more like him.

I also appreciated the story ties into the cover. The cover graphics have been inconsistent (at least to me) concerning their relevance to the story content of each book. So I always appreciate when the cover actually does have a connection to the story.

All in all guys, I loved it. Sometimes books that feature the alternate main character's POV don't actually feel like they're adding any benefit to the original. But that was not the case for Midnight Sun as I felt it added to the original story in more ways than one. I actually think Edward has a more interesting story, but perhaps I wouldn't think so if I didn't have Bella's side of the story first. I felt extremely anxious during the scenes focused around James even though I knew the outcome. And I fell in love with the characters and story all over again. If you already feel like you have closure with Edward and Bella's story then maybe you will be perfectly content without reading Midnight Sun, but I can say I only feel closure having finally completed this book, and I'm so grateful to Stephenie Meyer for finally finishing it. Midnight Sun gets 5 Stars from me. Have you read Midnight Sun? What did you think? Let me know!

P.S. I also want to mention that while I can still picture Kristin Stewart as Bella, Robert Pattinson's portrayal of Edward never set right with me, and Midnight Sun concretes my belief that he didn't understand Edward in the same way that Stephenie Meyer wrote him. So I had to erase all movie scenes from my head. Which wasn't too terribly hard to do.

P.S.S. I had no idea that I would hate Rosalie as much as I do given what I now know about her thoughts. She was never my favorite character, but now I am so angry with her.