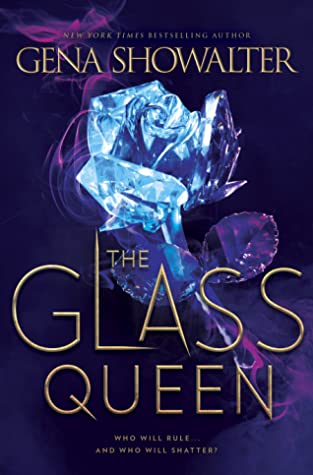 The Glass Queen (The Forest of Good and Evil, # 2)

Goodreads description--Once Upon a Time meets Game of Thrones in book two of New York Times bestselling author Gena Showalter’s magical, romantic dark fantasy series, in which the fairy tales we know and love are prophecies of the future. Welcome to the Forest of Good and Evil, where villains may be heroes and heroes may be villains…it all depends on who you ask.

Ashleigh Anskelisa may be called the Glass Princess due to her weak heart, but Saxon, king of the Avian, knows she is more dangerous than broken glass, in this Cinderella retelling that sweeps readers into the magical land of Enchantia, filled with treacherous enemies, unexpected allies, forbidden love, and dangerous magic! Can destined lovers find their way to each other, or will evil win the day? Everything changes at the stroke of midnight as one determined princess fights for her legacy, her love, and the crown that is her destiny.

The majority of The Glass Queen takes place shortly after The Evil Queen . The only real exception is the very beginning. There is a scene from Ashleigh's birth and then another from 14 years later when her mom died. And then the rest takes place in the present-day.

Ashleigh plays the role of Cinderella in this retelling. She was born with a weak heart (physically) and her father never wanted her. Only her mother's love saved her, but her mother died when Ashleigh was 14. She meets Prince Saxon at her mother's funeral and he immediately begins to glare at her with hatred in his eyes. The two have a short confrontation that Ashleigh doesn't remember involving fire being shot at Prince Saxon. Outraged, he vows she will pay reparations. Her father then exiles her to a temple where she works as a servant until called back to her father's side to work as "palace liaison" to Prince Saxon in a tournament to win her stepsister's hand in marriage. Saxon is determined to use this opportunity to make Ashleigh pay for her past sins. More sins than she even realizes she's committed.

The players of The Glass Queen were much more obvious than The Evil Queen. At least in that Ashleigh never questions that she plays the role of Cinder in the prophecy and Saxon the role of the "marriage-minded prince." The two are drawn to each other despite having a more complicated history than Ashleigh knows in the beginning and despite appearing to be doomed. I found it enjoyable to not feel 100% confident in who was who when I read The Evil Queen, but I think I enjoyed it even more in The Glass Queen to feel confident in knowing who each character represented.

One of my complaints about The Evil Queen was the maturity levels of the characters. Each of the main characters had a retaliation mindset. You hurt me now I have to hurt you worse. And Saxon had that attitude as well. At least in the beginning. But Ashleigh was leagues above this mindset. She was the type of character that endures true hardships and remains positive, remains hopeful, and refuses to attack those who have harmed her in the past. Even when she has the power to do so. I like rooting for this type of character.

Because Saxon and Ashleigh started off in such a rocky place, I enjoyed their journey very much. Hate to love relationships often turn out to be some of my favorites. Theirs was no different.

-Noel polled a bunch of random strangers about our situation, and asked if it was all right to hurt an innocent girl in order to kill an evil phantom. Apparently, polling random strangers is the best way to make a decision in the mortal world...

-“Stop being ridiculous, boys. For the lastish time, I’m betraying you both.”

-“From my vantage point, I don’t think fate has ever helped me.” “Then you aren’t paying attention.”

One thing I did find contradictory...The characters seemed a little hypocritical when it came to their feelings about death and killing. They didn't seem to mind fighting in a tournament that including much killing. Roth and Saxon were doing a large portion of that. And the tournament was really just a ruse. Yet when it came to Ashleigh's father or even other major characters at the end, they couldn't bring themselves to kill out of punishment or justice. Yet for sport...as a distraction...didn't seem to bother them. And actually, Ashleigh comments about how attractive Saxon is multiple times after he battles others resulting in his killing them during the tournament. It just felt a little disjointed and contradictory to me.

I read The Glass Queen really quickly. I didn't want to put it down even when I had to. As a matter of fact, I had to force myself not to read a couple of times in order to get things done around the house. I enjoyed Ashleigh and Saxon's relationship journey as I tend to do with hate-to-love relationships. I also appreciated knowing who each character represented in the retelling. The Glass Queen gets 4 Stars. Have you read The Glass Queen? What did you think? Let me know!