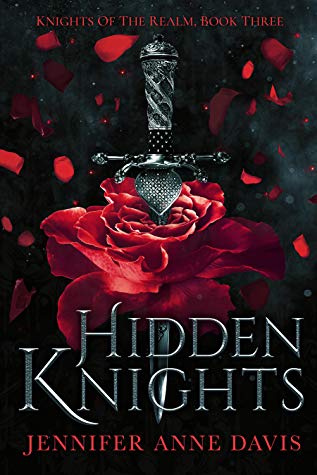 Hidden Knights (Knights of the Realm, # 3)

Goodreads description--With Prince Henrick dead, a foreign army in league with the king, and the palace taken, Reid must find a way to right the wrongs for the people of Marsden.

Reid never expected to find love, friendship, or her mother in the kingdom of Axian. She also never expected to become a leader for her people. With the king threatening to overthrow the dukes and take complete control of the kingdom, Reid realizes she may be the only one in a position to stop him. With the ring her father gave her, the commanders of the army at her side, and a master schemer in league with her, Reid just might be able to pull off the greatest upset in Marsden history—all she has to do in step into the role she was born for.

To protect her kingdom, Reid must outsmart them all. Luckily, she’s spent the last eighteen year learning the art of manipulation, and she isn’t above putting those skills to the test.

Hidden Knights has thus far been one of my most anticipated books of 2020. I wanted it in my hands as soon as I finished Shadow Knights. Thankfully I didn't have a terribly long wait. And you know what, it didn't disappoint.

Jennifer Anne Davis is a master plot weaver. She's written more than one series that I have devoured and finishing Hidden Knights has made me want to go back and finish a prior series of hers that I haven't completed. She has many pieces of the puzzle moving at one time. While some are easy to predict, other parts the reader and characters just don't have enough information until all of a sudden they do. There are a few times when I feel she writes for convenience's sake, but none that are too big to affect how I feel about her storytelling.

Reid has come a long way. She started the series pretending to be a man. Unsure of herself, she has to hold back so much of herself so that she doesn't slip up and reveal the big secret. I think in book 2, Reid began to learn herself and figure out what she wants for herself, what she wants for her kingdom, and what she's willing to do to see her dreams for herself and her country realized. She comes into her own in Hidden Knights both in her physical and intellectual capabilities as well as finally being able to open herself up with others she's come to care about. I'm glad that Jennifer Anne Davis allowed Reid to have feelings for Gordon but then move past them. One of my favorite things is to see a character move from one relationship to a different one that fits them better and helps them to grow as a character. Reid was often wise. She wasn't ignorant over the role she was going to take on, but she accepted her duty to her people with dignity and strength.

Dexter was by far one of my favorite characters. His transformation over the series was vast as well. Though we don't see him much in Realm of Knights we do see him as being strong, capable, loyal to his family, and intimidating. I was immediately excited about him being forced into an arranged marriage with Reid. I hoped from the first hint of it that this might be a hate-to-love relationship. And Jennifer Anne Davis didn't let me down. He was very reluctant to connect with Reid, but he realized that a partnership between them might be beneficial for the kingdom and slowly agreed to work with her instead of against her for a common goal. The two began to care about each other and that continued to grow. This slow growth relationship was absolutely my favorite part. Dexter himself was wise also. His ability to lead was obvious. He knew when to trust himself, when to trust those closest to him, how to delegate, and how to take action himself.

The side characters I loved were all present as well. Ackley, Gordon, Idina, Leigh, Gytha, Kamden, Harlan, Nara, and more. I would have liked to have seen Colbert a little more. I feel like there's much to him that was hinted at but not explored. Ackley both surprised me and didn't. I wouldn't mind seeing more of him. Idina also. Jennifer Anne Davis set up enough with her that she could write a spin-off following Idina and Owen (Ackley could be in it as well). I'd read it for sure.

I will say that I felt a little like the ultimate end of Eldon was a bit anticlimactic after all the build-up. Especially when contrasting the conclusion of Anna.

Hidden Knights was a really good conclusion to the Knights of the Realm series. I didn't find it to be perfect as a few things seemed a little too easy and others needed perhaps some additional explanation. But I enjoyed this journey so much. The characters were given satisfying endings. And I would immediately pick up any spin-offs Jennifer Anne Davis decided to write. The pay off for Reid and Dexter was worth the journey. Hidden Knights gets 4 Stars. Have you read Hidden Knights? What did you think? Let me know!