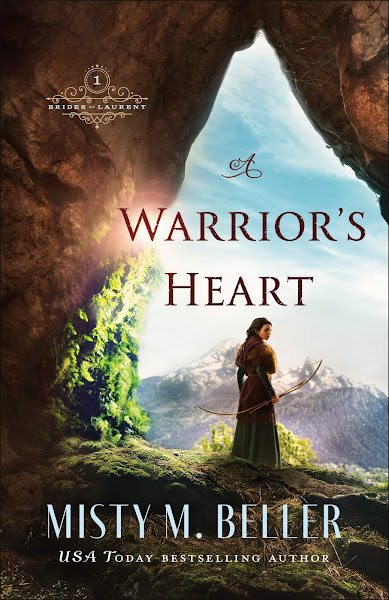 Goodreads description--Brielle Durand is a key defender and hunter for her people's peace-loving French settlement in the Canadian mountains. When a foreigner wanders too near to their secret homes, she has no choice but to disarm and capture him. She won't allow another massacre like the one that killed her mother a dozen years before. But now, what to do with this man who looks at her in a strange way?

Evan MacManus was on assignment to find among the caves the mineral pitchblende that might help America win the War of 1812. Despite being taken prisoner, Evan is determined to complete his mission. But when that assignment becomes at odds with his growing appreciation of the villagers and Brielle, does he follow through on the promise he's made to his government or take a risk on the path his heart tells him is right? Either choice will spell death for someone.

I read Misty M Beller's Hearts of Montana series and really enjoyed it. So I decided to read her next release which is the start of a new series. A Warrior's Heart is book 1 of the Brides of Laurent series. And I was a little disappointed.

The characters were fine. Brielle is the head of the guard of this secret village in the mountains. She's worked hard to achieve this position. And it seems that for the most part, her job has actually involved hunting for the tribe. She finds a man getting much too close to the village entrance and shoots him with a sleep potion tipped arrow. Evan is brought into the village and guarded in a storage room until the Brielle can find out what he is doing in the area and if the council deems him safe enough to release. Of course, the two spend time together and eventually open up to each other. In the process of getting to know each other, both find qualities about the other they admire and begin to develop feelings.

Now the romance is always what drives a story in my opinion. And I enjoyed Brielle and Evan's journey. The side characters were interesting and mostly likable when they were supposed to be and despicable when those were supposed to be. But I guess where I struggled most was the whole secret village piece. I've previously read a story with a family that was sequestered high on a mountain alone for a long period of time until they were stumbled upon, and I struggled with that too. I guess for me it's kind of like mermaid stories. I like the sound of the concept, but the execution has fallen flat for me both times. Maybe, I find it a little too unbelievable. That doesn't even feel like the right word. But something I can't put my finger on doesn't appeal to me.

I imagine Audrey will be the next character in the series to take center stage because she was the next most present female character in this book. I liked Audrey. She was sweet and all things good. But I also feel like my overall enjoyment of the concept of the hidden village might prevent me from enjoying her story as much as I would like. So that leaves me wondering if I will attempt to read more of this series when the time comes or not. I'm unsure at this point.

A Warrior's Heart gets 3 Stars from me. I liked Brielle and her strong female character. And I enjoyed the build between her and Evan. But I wasn't blown away by many of the side characters. And the secret village part of the concept left me wanting...but not in a good way. I'm unsure whether I will continue the series at this point. Have you read A Warrior's Heart? What did you think? Let me know!