Beyond the Point - Review 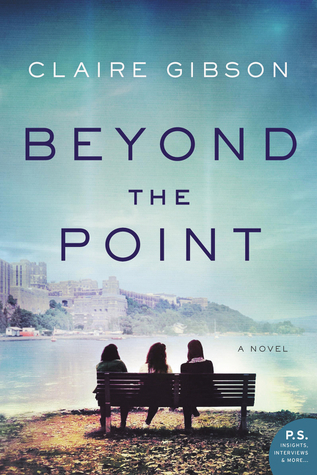 Goodreads description--In this powerful debut novel set at the U.S. Military Academy at West Point, three women—a nationally-ranked point guard, the granddaughter of an Army general, and a rebellious Homecoming Queen—are brought together in an enthralling story of friendship, heartbreak, and resilience.

Duty. Honor. Country. That’s West Point’s motto, and every cadet who passes through its stone gates vows to live it. But on the eve of 9/11, as Dani, Hannah and Avery face four grueling years ahead, they realize they’ll only survive if they do it together.

Everyone knows Dani is going places. With athletic talent and a brilliant mind, she navigates West Point’s predominantly male environment with wit and confidence, breaking stereotypes and embracing new friends.

Hannah’s grandfather, a legendary Army general, offers a stark warning about the dangers that lie ahead, but she moves forward anyway, letting faith guide her path. When she meets her soul mate at West Point, the future looks perfect, just as planned.

Wild child Avery moves fast and doesn’t mind breaking a few rules (and hearts) along the way. But she can’t outpace her self-doubt, and the harder she tries, the further it leads her down a treacherous path.

The world—of business, of love, and of war—awaits Dani, Hannah, and Avery beyond the gates of West Point. These three women know that what doesn’t kill you makes you stronger. But soon, that adage no longer rings true—for their future, or their friendship. As they’re pulled in different directions, will their hard-forged bond prevail or shatter?

Beyond the Point is a heartfelt look at how our closest friends can become our fiercest battle buddies. After all, the greatest battles we fight rarely require a uniform.

I don't usually read "friendship" stories. There's nothing wrong with them. I just prefer romantic relationships. But I was hoping that Beyond the Point might have three romances. Regardless, I ended up putting off reading this book for years because I knew it wasn't something I would normally pick. When I saw this available in the audiobook format from the e-library, I decided to check it out.

I listened to about 60% of Beyond the Point from the audio version and then transferred to the egalley I got a few years ago to finish up. I liked that each girl's POV has a different narrator for the audiobook.

Each of the girls is so different from each other. Dani is the heart and the glue that keeps this trio together. She was the most talented basketball player and one of the side characters describes her as being the smartest. Hannah is religious. She's steady and serious. Sweet. And then Avery is the wild child. She's always chasing boys (or being chased by boys) and trying to get away with breaking as many rules as possible. In some ways, it was hard to see how these girls fit, but proximity and shared experiences really bond people together.

A large portion of the story took place during the girls' time at West Point, but most of the story took place after--which makes sense considering the title. I'd like to talk about what happened after, but I worry I'd spoil too much. I will say that each girl goes through some major life events. And ultimately war and death put it all into perspective.

I was feeling like Beyond the Point was just "okay" until the end. Of course, I still prefer romance stories, but the ending pushed my overall enjoyment of the story up a notch.

-What was it going to take for someone to finally see her for who she really was? And like what they saw?

-Faith isn’t really faith until it’s beat up and put through a fire. When you’re crushed, you feel like you’re dying. But you’re actually coming to life. When you’re broken, that’s when the best of you comes out.”

-“Hindsight is an unfair standard to use against yourself,” Dani replied.

-“I don’t feel like I deserve to feel upset about my life,” Avery admitted. “I should be fine.”“You should be what you are,” said Dani.

-When you allowed yourself to enter someone else’s trauma, there were so many benefits: a righted perspective, a deeper sense of friendship, a holy devotion to the sacredness of now.

-None of this makes sense. But the story isn’t over.”

-I wanted perfection. But it turns out, here on earth, we don’t get perfection; we get people.”“And people suck.”“And even the ones that don’t suck let us down,”

-The point of life isn’t to quench our thirst, it’s to realize we’re thirsty for something that we can’t find here.”

-pain comes for you, body and soul, whether you’re ready or not...

Beyond the Point is not my normal reading preference. But it was still an enjoyable story about three girls who meet in college, shouldn't have anything in common, but form life-long bonds that can survive through life, love, war, and loss. Beyond the Point gets 3.5 Stars from me. Have you read Beyond the Point? What did you think? Let me know!