Never Fall for Your Fiancee - Review 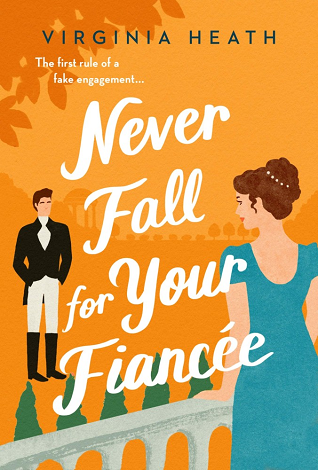 Goodreads description--The first in a new historical rom-com series, a handsome earl hires a fake fiancée to keep his matchmaking mother at bay, but hilarity ensues when love threatens to complicate everything.

The last thing Hugh Standish, Earl of Fareham, ever wants is a wife. Unfortunately for him, his mother is determined to find him one, even from across the other side of the ocean. So, Hugh invents a fake fiancée to keep his mother’s matchmaking ways at bay. But when Hugh learns his interfering mother is on a ship bound for England, he realizes his complicated, convoluted but convenient ruse is about to implode. Until he collides with a beautiful woman, who might just be the miracle he needs.

Minerva Merriwell has had to struggle to support herself and her two younger sisters ever since their feckless father abandoned them. Work as a woodcut engraver is few and far between, and the Merriwell sisters are nearly penniless. So, when Hugh asks Minerva to pose as his fiancée while his mother is visiting, she knows that while the scheme sounds ludicrous, the offer is too good to pass up.

Once Minerva and her sisters arrive at Hugh's estate, of course, nothing goes according to his meticulous plan. As hilarity and miscommunication ensue, while everyone tries to keep their tangled stories straight, Hugh and Minerva’s fake engagement starts to turn into a real romance. But can they trust each other, when their relationship started with a lie?

Never Fall for Your Fiancee is one of those books that could never really happen in real life. The story is so outlandish to be believable. But it was delightful just the same. Hugh has been lying to his mother for years about being engaged to a fictitious woman named Minerva. His stories have been a means of deflecting her matchmaking intentions. But since she lives in America, she has no way of verifying his accounts of his engagement and fiancee.

Hugh's mother knows him well and she's long since believed Minerva to be an invention of Hugh's imagination. So she determines to come back for a visit. In the meantime, Hugh randomly meets a woman named Minerva and offers to pay her to pretend to be his fiancee. Minerva wanted to say no to his request but he offered her such a large amount of money that it would change her and her sister's life for years to come.

Minerva and Hugh have an instant connection and attraction. But neither can act upon their interest. Hugh is so far above her station, but most of all, Hugh has been open with her about his disinterest in marriage as well as his flaws as he sees them. Hugh's father and grandfather were both disloyal husbands and his attention has never stayed on one woman either. So he believes himself to be incapable of being a good and loyal husband.

Hugh and Minerva both have quick wits, and I loved the banter between them. I can only imagine how much fun it is going to be to read Diana and Giles's story which I assume will come next. Their banter and hate to love potential romance is something I anticipate.