One for the Money - Review 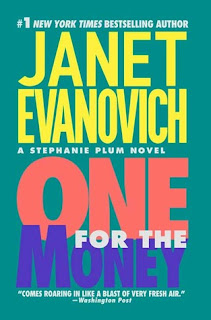 Goodreads description--Welcome to Trenton, New Jersey, home to wiseguys, average Joes, and Stephanie Plum, who sports a big attitude and even bigger money problems (since losing her job as a lingerie buyer for a department store). Stephanie needs cash--fast--but times are tough, and soon she's forced to turn to the last resort of the truly desperate: family.

Stephanie lands a gig at her sleazy cousin Vinnie's bail bonding company. She's got no experience. But that doesn't matter. Neither does the fact that the bail jumper in question is local vice cop Joe Morelli. From the time he first looked up her dress to the time he first got into her pants to the time Steph hit him with her father's Buick, M-o-r-e-l-l-i has spelled t-r-o-u-b-l-e. And now the hot guy is in hot water--wanted for murder.

Abject poverty is a great motivator for learning new skills, but being trained in the school of hard knocks by people like psycho prizefighter Benito Ramirez isn't. Still, if Stephanie can nab Morelli in a week, she'll make a cool ten grand. All she has to do is become an expert bounty hunter overnight--and keep herself from getting killed before she gets her man.

First let me say that I've gone about this series all wrong. My sister was listening to these on audiobook from the library and told me one day that I just HAD to listen to one. So she let me borrow it and it was HILARIOUS! And completely in the middle of the series. I've since listened to books 15-17 (possibly even 14--I can't remember) on audiobook. I've reviewed Sizzlin' Sixteen and Smokin' Seventeen. But after watching One for the Money with Katherine Heigl, I knew I needed to start this series from book one. And so, that's what I did.

I loved getting the backstory of these characters rather than just being thrown into the middle of the story. Morelli is much deeper knowing his history with Stephanie than just a Trenton cop. From the later books, I get the opinion of him just being a standup/normal kind of guy. But getting his history and him being wanted for murder and everything in this book, I get that there's more to him than that. He's even got a hint of the bad boy in him, which makes him all the more appealing. I also think he was cast perfectly in the movie version and Jason O'Mara is the perfect fit for him. 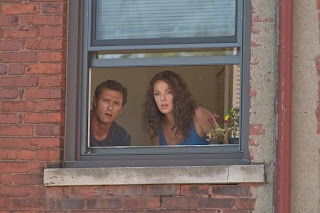 I really thought they did a good job turning this one into a movie. The first half of the book was pretty right on with the book. And what differences were in the movie were acceptable in my opinion--knowing that no movie will follow the book exactly. Lula's casting was pretty perfect too (Sherri Shepherd), though I love the voice that Lorelai King (the reader in the later audiobooks) does for her even better. 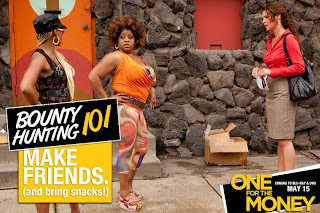 As always with the Stephanie Plum books, there's a phrase or two that catches my attention. While I didn't quite laugh out loud during this book as I have in some of her others, I still did find an appropriate quote or two.

Morelli: "You can hold the flashlight next time we play train."

And Stephanie: "...there was nothing like packing a pair of cuffs to put some spring into a woman's step."

And so One for the Money gets 3.5 Stars. Check it out. If you've already read it, what did you think? Let me know. 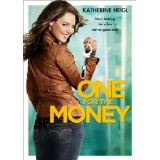 Photo credits: One for the Money's Facebook Page, Amazon, and Goodreads

Posted by Somewhere Only We Know at 7:57 PM