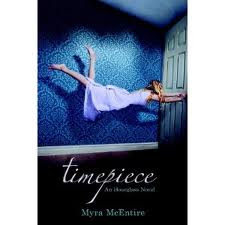 Goodreads description--A threat from the past could destroy the future. And the clock is ticking...

Kaleb Ballard's relentless flirting is interrupted when Jack Landers, the man who tried to murder his father, timeslips in and attacks before disappearing just as quickly. But Kaleb has never before been able to see time travelers, unlike many of his friends associated with the mysterious Hourglass organization. Are Kaleb's powers expanding, or is something very wrong?

Then the Hourglass is issued an ultimatum. Either they find Jack and the research he's stolen on the time gene, or time will be altered with devastating results.

Now Kaleb, Emerson, Michael, and the other Hourglass recruits have no choice but to use their unusual powers to find Jack. But where do they even start? And when? And even if they succeed, it may not be enough...

The follow-up to Hourglass, Timepiece blends the paranormal, science fiction, mystery, and suspense genres into a nonstop thrill ride where every second counts.

I must say that I enjoyed Timepiece much more than Hourglass, but I still find myself only able to give Timepiece 3 Stars. After reading Pushing the Limits (you can read my review here), I'm more critical than I probably otherwise would be because Pushing the Limits was just SO GOOD!

Timepiece was much better for me than Hourglass for no other reason than because Kaleb was the narrator. He was more interesting and all around more likeable to me than Emerson. She got on my nerves throughout Hourglass, and I have to say, she was only slightly less annoying in Timepiece--that's only due to the fact that I wasn't in her head the entire time. Kaleb made this book for me--everything that was enjoyable about this book revolved around Kaleb. I'm much more interested in the idea of someone feeling the actual emotions of those around them than I am about the ability to time travel.

I'm interested to see if the narrators willl swap again with the next book. If so, I'm hoping for an equally likeable character as Kaleb. And of course, I'll plan to read the next book.

As with my review of Hourglass (you can read that here), I feel like my review for Timepiece is coming off as more negative than I feel about it. I honestly did enjoy reading this book, and I'd definitely recommend this one to others.

Have any of you read Timepiece? What did you think about it? Let me know!