A Storm of Swords - Review 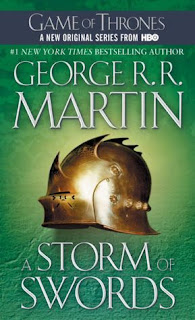 A Storm of Swords

Warning, may contain spoilers for A Game of Thrones and A Clash of Kings!

I struggled with what rating to give this one. I was unsure that it measured up to the way I felt about the other books I've given 5 stars, but it definitely provoked my emotions all around. Surprise, excitement, hope, fear, dread, frustration...I could keep going. And when a book brings out so much in me I have to give that book the honor of my 5 Star rating. And so I have.

While reading A Game of Thrones and A Clash of Kings, I found there to be several slow parts. I'd come upon a particular narrator and think "Ugh, not XXX's chapter! AGAIN!" And even when a narrator's chapter would come in A Storm of Swords that I wasn't particularly interested in reading (say...like Sam's), most of the time, something would happen that either surprised me or kept me interested. It usually only took a couple of pages to get me excited about the narration swap. The swapping back and forth has always been something that frustrated me because usually just as one narrator's chapter was getting good, we'd swap to one that was less interesting. Not the same in this book.

A Storm of Swords is like the third book within the last three months where I've had the thought, "Absolutely nothing good is happening to these people." Every single hope I have for these characters is shattered time and time again, but I don't dislike the book because of it. No. If anything, it makes me like it more. It's when things are unhappy that presses me to continue reading until I'm either finished or I come to a place where I feel satisfied. But that did not come. I also found I was quite unable to predict any of the surprises and twist. Though quite a few I probably should have seen coming. Oh well. If Ned Stark's beheadding in A Game of Thrones surprised anyone, just you wait for what's coming in A Storm of Swords.

I've frustrated my husband a good bit throughout my reading of this book. Whenever something big would happen, I'd eek and squeal, but I'd refuse to tell him why so that I don't ruin anything for him. He got to the point where he said, "Either tell me what happened, or shut up!" Ha! Bless him!

I debated on whether to jump right into A Feast for Crows or not, but I still haven't decided. On the one hand, I have quite a few questions after A Storm of Swords, whereas on the other hand, I cheated and looked at the narrators for A Feast of Crows and I'm not sure that it's going to hold the answers to most of my questions. But there's only one way to find out.

A Storm of Swords 5 Stars, full of surprises and action, and provoked a wide range of emotions for me. Check it out, and let me know what you think!

Posted by Somewhere Only We Know at 10:29 AM