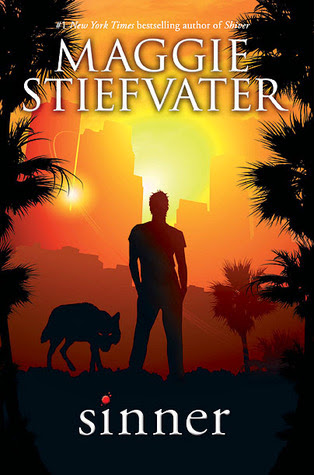 Sinner follows Cole St. Clair, a pivotal character from the #1 New York Times bestselling Shiver Trilogy. Everybody thinks they know Cole's story. Stardom. Addiction. Downfall. Disappearance. But only a few people know Cole's darkest secret -- his ability to shift into a wolf. One of these people is Isabel. At one point, they may have even loved each other. But that feels like a lifetime ago. Now Cole is back. Back in the spotlight. Back in the danger zone. Back in Isabel's life. Can this sinner be saved?

MAGGIE IS BACK!!!!!!!!!!! *SIGH* At the beginning of Sinner was a letter from Maggie Stiefvater to the readers. She said, "I had a blast writing Sinner. It was a summer-hot, neon-pink, sand-blasted-kiss vacation from The Raven Cycle. It's also, despite the shape-shifting, the truest novel I've ever written." And boy do I agree. I struggled through The Raven Boys because everything that I loved about her writing seemed to be missing. Where The Dream Thieves was much better to me than The Raven Boys, Sinner makes me see how much of Maggie Stiefvater's writing that I fell in love with was still missing even from The Dream Thieves. And well guys, it's back! Maggie's back! And I loved it.

Forever (The Wolves of Mercy Falls, # 3) wraps things up for Sam and Grace, but Cole and Isabel felt very "unfinished." We pretty much leave off knowing that Isabel is moving to California with her mother, but Cole is staying put. And so their ending was left unresolved and open. I'm so thankful that Maggie Stiefvater returned to Cole and Isabel's story. Cole and Isabel weren't my main focus while reading the first three books, but there was such a strong presence about both characters.

Cole was the lead singer of a rock group. He got into substance abuse and basically hit rock bottom. While Cole is sober now, he still uses his wolf self as a means of temporary escape in order to deal with heavy emotions, especially when things don't go as planned. He comes to California at the beginning of the book for one main reason--Isabel. Of course being Cole, Isabel isn't the ONLY reason. Cole has a plan to be on a reality TV show known for turning the subjects into a train wreck. Cole's thought process is that he can use the show to record a new album without having to sign with a record label.

Isabel...oh Isabel! Jaded as all get out. Isabel is still reeling from the pain of her brother's death and the destruction of her parents' marriage. Isabel is just in pain all around. Yet she tries so hard to hold it all in all the time. To be put together. To show no emotion to those around her. She doesn't trust ANYONE. And Cole showing back up...well she can't trust him when he says that he's back for her.

These two are a train wreck together. And they're a train wreck apart. But you can't help but feel the pain they both experience. You can't help but root for them individually and as a couple. You just can't help but get sucked in. Being Cole and Isabel means that this whole ride isn't all sunshine, blue skies, and rainbows. Things get real and dark and sometimes ugly. But Isabel and Cole have a connection that they just haven't, and can't, share with anyone else. They know each other. And that's something that neither one of them can take for granted.

As I've said, Maggie Stiefvater's writing is right on with this book. I loved it. I was highlighting like every page. Sometimes multiple times on a page. I was so excited to have this side of her writing back. My favorite quotes:

-...now I'd let myself think Isabel's name and there wasn't room for anything else.

-The others slithered and crawled to get her the tanks and the belt, unaware that in order to really get my look, you had to accessorize with death in the family and generalized heartbreak.

-"No, no, I'm looking for something very particular. Oh, wait, I just saw it."

-Here was the thing: I was in love with Cole. Or had been. Or was going to be. I couldn't tell the difference.

-What I wanted was: I wanted.

-"I'm asking if you want to take a manly stroll on the beach."

-"Here we have the glazed miniature chocolate bathroom cakes with a paraffin topping. These here are a duo of free-range eggs that are probably hard-boiled, or at least were wet for a long time. This here beside them is a furry, green egg."

-"I'd like to send a card to the flamingo who died to make your coat," Cole told me, "because it is doing a great job being apparel. I would like to put everything not covered by it in my mouth."

-His eyes said everything he hadn't. I wasn't sure my face hadn't been saying the same thing back to him.

-...nine or fifteen or twenty-two minutes...

-Internet: What do you want for your birthday?
Virtual Cole: to stay young forever
Cole texted me: Actually I want you

-...which made me wonder if I'd even said the never mind part out loud. I thought about it and I was pretty sure I remembered the action of forming the words.

-Did it matter if you'd changed if no one believed it?

-Fate was a lousy lay, and I was over her.

So many quotes, but seriously, I was so excited to have this version of Maggie Stiefvater's writing back that I couldn't stop highlighting.

Cole and Isabel's story isn't an easy one, but I fell in love with it. I want to discuss it for days and days and days, but I want you guys to experience it for yourselves. It's a quick read, and I have no doubt you'll get sucked in without much resistance. I dare you to try not to feel for these two characters who have been hurt so many times before. Sinner gets 4.5 Stars from me. Have you read Sinner? What did you think? Let me know!