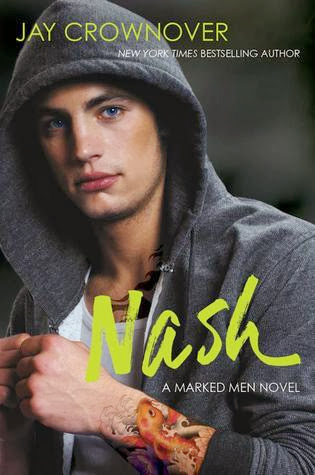 Goodreads description--Will their past determine their future?

Saint Ford has worked hard to achieve her childhood dream of becoming of nurse. Focused on her work and devoted to her patients, there’s no room for love. She doesn’t need a guy making waves in her calm, serene life—especially when he’s the unforgettable hottie who nearly destroyed her in high school. Dark, brooding Nash Donovan might not remember her or the terrible pain he caused. But he turned her world upside down . . . and now he’s trying to do it again.

Saint has no idea that Nash isn’t the cocky player he once was. Uncovering a devastating family secret has rocked his world, and now he’s struggling to figure out his future. He can’t be distracted by the pretty nurse he seems to meet everywhere. Still, he can’t ignore the sparks that fly between them —or how she seems so desperate to get away from him. But the funny, sweet, and drop-dead gorgeous Saint is far too amazing to give up on—especially since she’s the only thing in his life that seems to make sense.

When Nash discovers the truth about their past, he realizes he may have lost her heart before he could even fight for it. Now, Saint has to decide: is Nash worth risking herself for all over again?

Nash was the perfect book for me at just the right time. I’ve been struggling to find a good, happy book that I could get hooked into and read and read until I finished all the pages. And that’s just what I got with Nash. Because Rome built up Nash and Saint’s story throughout its pages, I was so excited to start Nash. I loved having an idea of what to expect going into Nash without having too much information at the same time. I still didn’t know why Saint seemed to dislike Nash.

How Saint could have been so utterly destroyed by Nash in high school yet Nash didn’t really remember her was something that I was interested to uncover the juicy details about. Saint was an easily relatable character. She has some serious self-esteem issues. While I normally prefer to read about strong, confident females, Saint was just so relatable that I couldn’t help but like her. She does have issues, but she isn’t what I would consider a weak character. She doesn’t berate herself. She didn’t have a high self-esteem in high school and essentially she saw in others’ behavior towards herself what she expected to see. And that behavior and words she carried with her throughout college until now. Who can’t say that they haven't been there? I know I have. While I would typically categorize myself as someone with a healthy self-esteem (perhaps some would consider high), I can remember in vivid detail the day in 7th grade Music Theory class when a girl a year older than me told me that I had big legs. I carried that with me for a long time. And though I still remember the comment to this day, it doesn’t rule me anymore. But Saint had to get there too. She had to overcome, and though her journey wasn’t easy, I really enjoyed seeing her triumph over her own negative view of herself.

I loved that Jay Crownover didn’t use Nash as Saint’s “fix.” Nash didn’t “fix” her. Nash tried and tried to show Saint that he wasn’t the same person he used to be. He tried to show her how much he valued her, but he eventually learned that their relationship would never work as long as Saint viewed herself the way that she did. No amount of a high opinion from others was enough for Saint to overcome her low opinion of herself. This is so important to me, and I think essential for the young girls of the up and coming generation. It cannot be up to anyone else to define your worth. Nash isn’t a religious book by any means, but I’m going to take this opportunity to share that the Eternal God, Self-Existent Creator of the Universe placed enough worth on each and every one of us that He sent His Son, Jesus, to Earth to empty Himself of deity and become the creation, to live a perfect and sinless life and then to die, unjustly on the cross just to redeem ME (you) back to Himself. That is how much each of us is worth. God defines our worth.

Nash is a good character. We’ve seen him throughout all of the other books, and I couldn’t wait to read his story. I figured his story would be more of a struggle for me because of his known “playboy” status. Yet that really wasn’t the case. Nash knows fairly early on that he wants to explore his relationship with Saint. He doesn’t always understand what his feelings for her mean, especially in the very beginning. But I appreciated the fact that he didn’t put too much effort into fighting his attraction to her or fighting the idea of a real relationship with her. Though he never expected to settle down, he sees it happening for his friends all around him and the idea isn’t as foreign as it once was. Of course, we see Nash struggle with the revelation that Phil is his father and is dying of cancer. Watching their relationship more than anything was what brought tears to my eyes. Anyone who has witness a loved one go through cancer can relate to this aspect of the story.

The big conflict between Nash and Saint was a bit over dramatic and obvious from a hundred miles away. Saint’s low self-esteem results in some assumptions and major overreactions. I understand it all, but it was a bit eye roll-worthy. This was the only real letdown for me when it came to the book. Yet it wasn’t annoying enough to distort my opinion of the book. I love how during this part of the book Nash remained steadfast. He let Saint work through her own thoughts and feelings without resorting to any major, over-the-top romantic gestures. This particular situation didn’t require them.

The more I look back on the book the deeper I feel like this story line gets. Nash was another great installment in the Marked Men series, and I love how Jay Crownover set up Rowdy’s story as well. I wish so bad that a chapter from Rowdy had been included at the end of Nash instead of one from Better When He’s Bad, but I understand the marketing strategy there. Nash was everything that I expected it to be, and everything I needed it to be at just the right time for me. Nash gets 4 Stars. Have you read Nash? What did you think? Let me know!