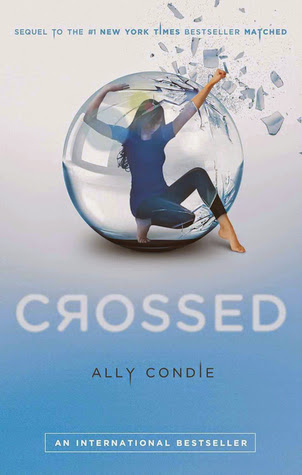 So I really enjoyed Matched, right? But it was very similar to Delirium which I liked better. I went into Crossed knowing that a lot of people didn’t enjoy it as much as Matched. Having not read any reviews of Crossed before starting it, I didn’t know WHY people weren’t enjoying it as much. I grabbed this from the library on audiobook because I really enjoyed hearing the writing style of Matched spoken out loud. I thought the narrator, Kate Simses, did a really good job. Having said that, audiobooks can be tricky. I find that I can listen to audiobooks and multitask only when whatever else I’m doing doesn’t require much thought from me—housework, imaging (a mindless work task), cleaning the pool, etc. But that wasn’t really the case when I started Crossed. I apparently needed to devote more brainpower to work than I thought and thus I had some issues with Crossed in the beginning. I had to restart it twice because I had no clue what was going on. And when I finally made it to the 50% mark in the book, I forgot to renew it and it was returned to the library only for me to be put on the waiting list to check it back out. *sigh* Oh well. I finally finished it.

I can see why people weren’t as into Crossed as Matched. Although describing why feels more difficult. I guess because in Matched you have the excitement of first love and a slight tinge of danger and rebellion. But Crossed is out and out rebellion against Society and our relationship between the male and female lead is pretty cemented even if they’re currently physically separated. Like many other dystopians before (or at least that I’ve read before: Requiem, Allegiant, Pawn ), the Matched series appears to be falling into the trap where our heroine seeks to fix a broken society. It’s the broken society that we love to read about. While the fixing of what is broken is important and we need to read about overcoming obstacles, I’m just not really a fan of these worlds that I fall in love with in book 1 turning into an all-out political war. It’s one of the biggest downfalls of the dystopian genre—at least when it comes to a series within the genre.

Cassia and Ky both narrate in Crossed and I’m thankful for the dual narrators in the audiobook version as well. While Cassia and Ky are separated, Cassia thinks about Ky way too frequently for my tastes. He completely dominates her thoughts. Seriously every third sentence mentions him. And one of my biggest frustrations was that Cassia and Ky’s chapters mirrored each other. They would often be thinking the same thoughts at seemingly the same time. And while I know some of that is possible and probably true—couples often do this I’m sure—it was a bit overdone for me. I’m really big on couples having a distinct voice if both are going to narrate. And they did have a distinct voice (especially because two different people did the narration for the audio version), but the thoughts were very similar even to the point of dreaming similar dreams at the same time.

The biggest plus for Crossed was Ally Condie's writing style for me. Like Matched, Crossed is very poetic at times. Here are my *favorite quotes:

-I’m only afraid of dying wrong.

-Because in the end you can’t always choose what to keep. You can only choose how you let it go.

-It was brave of them to love again.

-And then I reach the plain and wish for nothing but what I have.

-”You need to choose. I don’t think you see either of them clearly.”

-Is this what Ky feels? Like no one wants the whole? That his truth is too heavy to carry?

I had some frustrations with Crossed, and I can definitely understand why people may have enjoyed it less than Matched but it was still a pretty good read listen. Crossed gets 3.5 stars from me. Have you read Crossed? What did you think? Let me know!

*It's extremely difficult to quote from an audiobook. I do my best to get punctuation and all of the words correct. Any mistakes are my fault. If you see any mistakes, please let me know in the comments and I'll update. It's near impossible to get it all right when I can't see it in print.