Before I Fall - Review 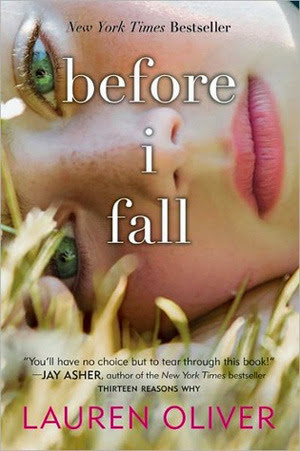 Goodreads description--With this stunning debut novel, New York Times bestselling author Lauren Oliver emerged as one of today's foremost authors of young adult fiction. Like Jay Asher's Thirteen Reasons Why and Gayle Forman's If I Stay, Before I Fall raises thought-provoking questions about love, death, and how one person's life can affect so many others.

For popular high school senior Samantha Kingston, February 12—"Cupid Day"—should be one big party, a day of valentines and roses and the privileges that come with being at the top of the social pyramid. And it is…until she dies in a terrible accident that night.

However, she still wakes up the next morning. In fact, Sam lives the last day of her life seven times, until she realizes that by making even the slightest changes, she may hold more power than she ever imagined.

Named to numerous state reading lists, this novel was also recognized as a Best Book of the Year by Amazon.com, Barnes & Noble, The Daily Beast, NPR, and Publishers Weekly. It has been optioned for film by Fox 2000 Pictures.

Before I Fall makes number 5 of Lauren Oliver’s books that I’ve read. I LOVED Delirium. I was slightly less impressed with Pandemonium. I enjoyed Requiem better than a lot of people because I think I had low expectations. And then Panic had a better concept than execution I think. Before I Fall was a book that was hyped up pretty big time to me before and during my read of it. And that unfortunately played into my overall feelings of the book. Let me say that I did enjoy Before I Fall but not as much as I was expecting to based on the hype.

Sam started out as a character that I hated. She and her entire group of friends. They are the popular girls who elevate themselves by stepping on others. On top of that, these girls were drunk more than they were sober. And they skipped classes more than they attended. They apparently party all the time and their parents are either more screwed up than they are, or they’re essentially absent. Since everyone was raving about how good this book was, I knew that some major character growth HAD to be in store for our leading lady—and thank goodness this was true.

When required to relive the day you will die over and over again, anyone would be forced to consider what’s really important in life versus what is superficial, unimportant, and just plain wrong. Sam was a bit of a slow learner, and it wasn’t really until her last two or three relives that she even started realizing what the difference in these things are. Essentially that’s what this book boils down to, and what makes others rave about it. This book shines in such contrast what is important from what isn’t. Things are not important. The clothes you wear. Whether you have 100 superficial friends or few really good ones. The way you treat other people—your family, your friends, people who aren’t your friends. Whether you are popular or not noticed at all. Whether you’re nice or you torture others. Whether you’re scared and insecure or you’re comfortable in your own skin. All of that is very important. This makes Before I Fall a book that I wish every teenage girl would read.

Even as Sam was learning her lessons and making her slow changes, the process wasn’t always easy to read or live through these experiences. These characters are for the most part real and raw and ugly and beautiful. The hopelessness of trying to change other people, to effect change where it’s needed and been long neglected weighed on me heavily while reading Before I Fall. But most of all, the message is that you just really don’t know how much time is left for you and what will you do with it? Will you take it for granted? Will you redeem it for something valuable? Will you be remembered as the mean girl? Or the one who saved someone’s life? Will you make a difference—make the world a better place? Or will people feel even slightly relieved knowing that you won’t be around to torture them anymore? Do you spread joy and life and love wherever you go? Or like Eeyore, does a dark cloud follow you, raining on everyone around you just for being near? What legacy will you leave?

Like most of Lauren Oliver’s writing, Before I Fall had some beautiful moments and quotes. Here are my favorite non-spoiler quotes:

-The thing is, you don’t get to know. It’s not like you wake up with a bad feeling in your stomach. You don’t see shadows where there shouldn’t be any. You don’t remember to tell your parents that you love them or—in my case—remember to say good-bye to them at all. If you’re like me, you wake up seven minutes and forty-seven seconds before your best friend is supposed to be picking you up.

-Izzy blows air out between her lips, “I wish nobody ever died,” she says. I feel an ache in my throat, but I manage to smile. Two conflicting desires go through me at the same time, each as sharp as a razorblade. I want to see you grow up and Don’t ever change.

-I suppose that’s the secret, if you’re ever wishing for things to go back to the way they were. You just have to look up.

-I’ve never been this sober around people this wasted, and I say a brief prayer that I’m not half as annoying as they are when I’m drunk. --(pretty sure you are)

-So many things become beautiful when you really look.

-He puts one hand behind my neck and pulls me toward him. And then we’re kissing. His lips are soft and leave mine tingling. I close my eyes, and in the darkness behind them I see beautiful things, flowers spinning like snowflakes, and hummingbirds beating the same rhythm as my heart. I’m gone, lost, floating away into nothingness like I am in my dream, but this time it’s a good feeling—like soaring, like being totally free. His other hand pushes my hair from my face, and I can feel the impression of his fingers everywhere that they touch, and I think of stars streaking through the sky and leaving burning trails behind them, and in that moment—however long it lasts, seconds, minutes, days—while he’s saying my name into my mouth and I’m breathing into him, I realize that, right here, is the first and only time I’ve ever been kissed in my life.

-It’s a nice thing to see. I’m glad I was looking.

Before I Fall wasn’t really an “easy” book to read, but it makes an impact. This will be a book that sticks with me for sure. I can’t give it less than 4 stars for that. Have you read Before I Fall? What did you think? Let me know!