The Kiss of Deception - Review 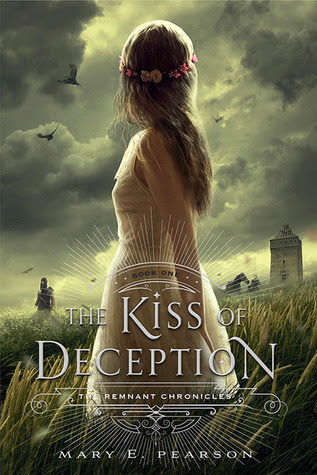 The Kiss of Deception (The Remnant Chronicles, # 1)

Goodreads description--In this timeless new trilogy about love and sacrifice, a princess must find her place in a reborn world.

In a society steeped in tradition, Princess Lia’s life follows a preordained course. As First Daughter, she is expected to have the revered gift of sight—but she doesn’t—and she knows her parents are perpetrating a sham when they arrange her marriage to secure an alliance with a neighboring kingdom—to a prince she has never met.

On the morning of her wedding, Lia flees to a distant village. She settles into a new life, hopeful when two mysterious and handsome strangers arrive—and unaware that one is the jilted prince and the other an assasin sent to kill her. Deception abounds, and Lia finds herself on the brink of unlocking perilous secrets—even as she finds herself falling in love.

I saw The Kiss of Deception for review and was immediately pulled in by the cover. Then after reading the description I settled on requesting it because it sounded exactly like something I would enjoy. You just never know when you request a book for review if it’s going to be a winner or not. And well, I kind of put off starting The Kiss of Deception because I still didn’t really know much about it. I didn’t know any other bloggers who had read it—until well I did. Then I started noticing it popping up. And I was hearing nothing but good things about it—though nothing too specific. After seeing Anna Reads feature it in her Top Ten Books Read So Far This Year post, I figured now was the perfect time to start it.

The Kiss of Deception was so much more than I expected it to be.

We start out the book with our princess, Lia, who is being forced into an arranged marriage in order to forge an alliance with another kingdom. This happens all the time, right? Well maybe not now, but throughout history. And yet, Lia doesn’t want this marriage. She wants to marry for love. She wants to be wanted. However, she’s the First Daughter. And First Daughter has a lot of burdens, responsibilities, and gifts that come along with it. Yet she just wants to escape the traditions and duties of being First Daughter and just be a regular person—free to make her own choices and live her own life. Maybe even fall in love. And so Lia decides to run—on the day of her wedding.

The prince she was supposed to marry is initially angry—at himself—for not having thought of running first. I’m not exactly sure what the prince was desiring to run from exactly since he doesn’t spend much time thinking about how he never wanted to be forced into a loveless marriage. But he does think about how he’s been trained to be a soldier but isn’t really battle-tested. In truth, he’s been protected for most of his life. He decides to chase after Lia in hopes of just watching her for a bit—maybe even telling her off for running.

While on the road and tracking Lia, the prince runs into an assassin that has been sent on a mission to kill Lia. Of course, the prince doesn’t know his new travelling companion is an assassin. And the two ride together into the town where Lia has found her refuge working as a tavern maid. Lia meets both the prince and the assassin at the same time. They give her names, but here’s where things start getting even more interesting—you, the reader, do not know which name belongs to which character—the prince or the assassin. So we’ve got the name Kaden and the name Rafe, but you don’t know which name belongs to the assassin and which belongs to the prince. Of course, Lia has no idea that there even is a prince or an assassin. I found this to be brilliant. I wanted to root for the prince, but I didn’t know whether the prince was Kaden or Rafe so I wasn’t sure if he was "winning" or not. Of course, while reading I was constantly on the lookout for clues as to which character is which, but Mary E Pearson did this so well that I really just couldn’t tell. Even when I felt strongly one way, I was always questioning what I thought I had figured out. Sentences that would lead me to think “surely this applies to the assassin” could also be applied to a prince who happens to be a solider. And any sentence hinting at revealing deception to the princess obviously applies to both. And so on and so on. Now that I know which is which for sure, I know 100% that I’m going to have to go back and re-read this book.

Not only did I find the character-confusion to be intriguing and masterfully done, but Mary E Pearson writes some beautiful and poetic sentences. I wasn’t struck with the writing style constantly as I have been in the past with authors such as Lauren Oliver, Ally Condie, Maggie Stiefvater, or Michelle Hodkin, but plenty of sentences and passages stood out to me as being lyrical, poetic, and just all-around powerful sentences. From the dedication (which I even highlighted in my kindle—“For the boy who took a chance, For the man who made it last…”) to the opening sentence of the book (“Today was the day a thousand dreams would die and a single dream would be born.”), I was impressed over and over again.

More of my favorite quotes:

-I closed my eyes against the thought, knowing that soon the day would cleave in two, forever creating the before and after of my life, and it would happen in one swift act that I could no more alter than the color of my eyes.

-…as I faced the last step that kept here from there.

-My dress streamed behind me, now wedding me to a life of uncertainty, but that frightened me far less than the certain life I had faced.

-There are some things you can never pay back.

-Some truths refuse to be hidden.

-“The truths of the world wish to be known, but they won’t force themselves upon you the way lies will.”…”And sometimes it prowls low here, heavy in your gut.”...”That is the truth wishing to be known.”…”It’s listening without ears, seeing without eyes, perceiving without knowledge.”

The Kiss of Deception was so enjoyable. It was unlike anything I’ve read before. I loved the mystery and being kept in the dark. Now…I must find time to re-read this book so I can go back and see all of the puzzle pieces I missed and the ones that I misinterpreted. The Kiss of Deception easily gets 4.5 stars from me. I can easily say that this book will make me Favorites of 2014 also. Have you read The Kiss of Deception? What did you think? Let me know!

Also, check out The Starry Eyed Revue’s gif review of The Kiss of Deception. It’s pretty much dead-on…and hilarious at the same time. Everything you need to know.

Email ThisBlogThis!Share to TwitterShare to FacebookShare to Pinterest
Labels: 4.5 Stars, Fantasy, Mary E Pearson, The Kiss of Deception, The Remnant Chronicles, YA