One Plus One - Review 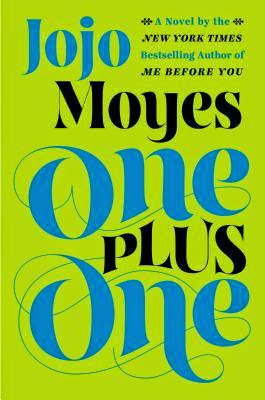 Goodreads description--One single mom. One chaotic family. One quirky stranger. One irresistible love story from the New York Times bestselling author of Me Before You

American audiences have fallen in love with Jojo Moyes. Ever since she debuted stateside, she has captivated readers and reviewers alike, and hit the New York Times bestseller list with the word-of-mouth sensation, Me Before You. Now, with One Plus One, she’s written another contemporary opposites-attract love story that reads like a modern-day Two for the Road.

Suppose your life sucks. A lot. Your husband has done a vanishing act, your teenage stepson is being bullied and your math whiz daughter has a once-in-a-lifetime opportunity that you can’t afford to pay for. That’s Jess’s life in a nutshell—until an unexpected knight-in-shining-armor offers to rescue them. Only Jess’s knight turns out to be Geeky Ed, the obnoxious tech millionaire whose vacation home she happens to clean. But Ed has big problems of his own, and driving the dysfunctional family to the Math Olympiad feels like his first unselfish act in ages . . . maybe ever.

One Plus One is Jojo Moyes at her astounding best. You’ll laugh, you’ll weep, and when you flip the last page, you’ll want to start all over again.

I’ve seen Jojo Moyes all over the place. From the very first review I saw from Aussie Zombie of Me Before You, I knew that I would need to read her work at some point. And when the opportunity came up to read and review One Plus One I knew I had to jump on it.

Initially I felt like Jojo Moyes might have been writing from too many POVs. At the very beginning I was getting people confused and wasn’t sure how each POV would draw the story into an overall, cohesive book. It didn’t take too terribly long to know each character, keep them straight, and to begin to see the connections between all of the POVs. The narrators are Jess, Ed, Tanzie, and Nicky.

Jess is a single mom. Her husband, Marty, left around two years ago to move in with his mother and get out of a depression/funk. He hasn’t had anything to do with the kids since he left minus periodic Skype calls. Jess is struggling to make ends meet. She works at least two jobs—as a maid/cleaner and a bartender. She’s working her fingers to the bone trying to take care of her kids—Nicky and Tanzie.

Nicky isn’t even Jess’s biological child. Marty—Jess’s husband—is Nicky’s father. His mother is a drug addict that is mentioned, but we never meet her. He’s been living with Jess since he was eight and she views him as just as much her child as Tanzie. I loved how Nicky looks out for Tanzie. Despite getting bullied and beat up for being a bit different from the other kids at his school, Nicky is going to do whatever it takes to see Tanzie happy. He helps Jess take care of her as much as he can, but he very much needs Jess. He needs a mom, and he needs a dad.

Tanize was a sweetheart. If Nicky’s different from the kids at school, Tanzie is a world apart. She loves math—like advanced level math. She loves sequins and anything homemade by Jess. She was such an adorable kid. Her love of math is actually where the book’s title comes from, and I appreciated the math theories being interwoven into the overall story in a way that made so much sense but without needing to understand advanced level math to understand. I also loved the relationship that Tanzie had with the family dog Norman who was just as much a main character as any of the others. Norman is huge (though I’m not sure exactly what breed). His body produces toxic smells. He can be hard headed and determined. And I fell in love with Norman just as much as the other characters.

And then there’s Ed. He doesn’t seem to fit at all into this equation. He’s the part owner of a software company and is being investigated for insider-trading, of which he’s actually guilty. Ed just wanted to find an easy, quick way to get out of a relationship with a girl that had become entirely too clingy. He was an idiot. And now he’s paying the price. Exiled from his regular home and his office, he spends some time at his beachfront condo where Jess happens to be the cleaning lady. He and Jess end up making a deal where Ed agrees to drive her family to Scotland for Tanzie’s math Olympiad in hopes that Tanzie will win the completion (and the prize money) and be able to go to prestigious private school that Jess can’t afford.

I completely fell in love with these characters. I wanted them all to succeed and find happiness. And I loved the slow development and changes that took place over the course of this crazy, wild, spontaneous adventure they all went on together. The layers upon layers of this story add to such a genuine feel. This is exactly what hooked me. Each character was multifaceted and had their own set of struggles. Each character had separate yet intertwined buildup, conflict, and resolution. While I was enjoying this book, I wasn’t completely hooked early on. I mean I was enjoying myself, but I didn’t find that pressing need to keep reading until after the 50% mark probably. I don’t think that affected my overall opinion of this book, but I did want to note that if you’re having trouble connecting, just keep pushing through. I feel certain you’ll be thankful that you did.

One Plus One actually succeeded where many other books have not. I actually cried. Like tears rolling down the cheeks at this one part. It was so raw and open and heartbreaking in that moment. I’m not the easiest person to make cry so this is often a feat when it comes to books, TV shows, and movies. I’m not sure if the setting being in England has anything to do with the number of f-bombs, but you might also want to be aware of this going into the book.

-…being a parent on your own when you were totally out of your depth was actually the loneliest place on earth.

-Who was it who had said you were only as happy as your unhappiest child?

- “Rich is paying every single bill on time without thinking about it.”

-It wasn’t that Ed would make it okay—he had his own problems to deal with—but somehow the sum of them added up to something better.

-It’s weird how you can miss something you only ever complained about.

-The Law of probability combined with the law of large numbers states that to beat the odds, sometimes you have to repeat an event an increasing number of times in order to get you to the outcome you desire. The more you do, the closer you get. Or, as I explained it to Mum, basically, sometimes you just have to keep going.

One Plus One gets 4 stars from me. I thoroughly enjoyed the ride. I loved all the layering of the characters and the stories. And I loved how everything fit together. The whole of One Plus One is definitely greater than the sum of its parts. Have you read One Plus One? What did you think? Let me know!