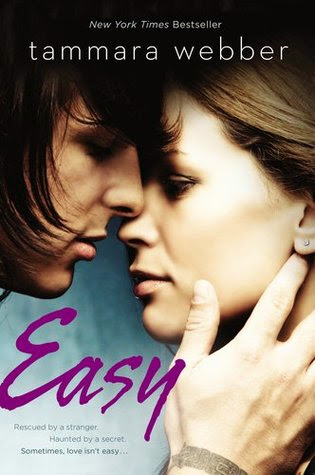 Goodreads description--Rescued by a stranger.
Haunted by a secret
Sometimes, love isn’t easy…

He watched her, but never knew her. Until thanks to a chance encounter, he became her savior…

The attraction between them was undeniable. Yet the past he’d worked so hard to overcome, and the future she’d put so much faith in, threatened to tear them apart.

Only together could they fight the pain and guilt, face the truth—and find the unexpected power of love.

A groundbreaking novel in the New Adult genre, Easy faces one girl's struggle to regain the trust she's lost, find the inner strength to fight back against an attacker, and accept the peace she finds in the arms of a secretive boy.

I’ve had Easy on my TBR list for a while now. Everyone I’ve ever seen mention it would rave about how much they loved it, so reading Easy was a no-brainer for me. I’ve read Between the Lines by Tammara Webber, and I really enjoyed it. So when Husband told me he was buying me some books for our anniversary and Easy was on sale for under $4, I had to pick it up. And I’m so glad I did. Easy was the perfect book for the mood I’ve been in lately. And it’s extremely rare that I finish a book and immediately want to turn around and re-read it. I didn’t. But only because I have so many others that I need to get to. Easy will definitely be one that I come back to for a re-read in the future though.

Jacqueline was recently dumped by her longtime boyfriend of three years. He decided that he wanted to play the field a bit and not be tied down to one person. Jacqueline was heartbroken. Not just over losing Kennedy, but over losing everything that came along with their relationship—having a boyfriend, the friends that came along with him, not being alone, always having a date to the parties, going to school together, the future they had planned. She lost all of that. During her mourning period she missed about two weeks of school and while she’s normally a really good student, Jacqueline has found herself struggling with economics. Lucky for her, her professor is lenient with her, assigns her a project to do to make up her midterm grade that she missed, and gives her the contact information for a tutor who can help her get caught up in the class.

In the meantime, Jacqueline tries to carry on with life as usual. She goes out to a party trying to pretend like everything is normal. But it’s just not. So she leaves the party early to head back to her dorm. Instead she finds herself in a situation in which so many other women have found themselves. She’s being attacked with no real way to defend herself. Fortunate for her, this guy shows up and beats the crap out of her attacker. She doesn’t know the guy, but after that she sees him all over the place. He tried to talk her into going to the hospital or the police station to report what happened, but she refuses. This puts him in a situation where he’s the only person who knows about what happened—besides her attacker—and thus they’re bonded.

Jacqueline could be any girl out there. I felt what she felt. From the heartbreak of her breakup, to her fear from the attack, to her guilt and anger, etc. Everything. Just about every step she made I could see myself making. I loved her character, her story, her feelings. All of it.

Erin is a great best friend and sidekick. When she finds out what happened to Jacqueline, she immediately signs the two of them up for self-defense classes. I love that about her. She makes sure that she and Jacqueline will both be empowered. They will be able to handle themselves if a situation should arise again in the future. And she has Jacqueline’s back in all things.

Lucas has it all. Every aspect a girl could want in a guy just about. I thought when he showed up to rescue Jacqueline that he would be a bad boy, but that’s not exactly the case. He’s smart, he’s capable of handling himself in a fight, he’s not afraid of his feelings for Jacqueline. He’s talented—an artist. He has a past that has shaped him, and while he still holds onto that past, he’s used it to help himself and to help others. Loved me some Lucas.

Oh you guys...I'm telling you too much. I won't discuss any more the characters. Just read this book, okay? Okay!

Book 2, Breakable, is told from the leading male's POV. *I can’t tell from the book description if Breakable is intended to be a retelling of Easy but from the other POV or if Breakable takes place after the events of Easy. Either way, I know Breakable is a book I want to read. Tammara Webber’s flowing writing style makes her books easy picks for me, but I can tell that even if Breakable is a re-telling of Easy (something I’m getting a little tired of), it’s possible that Breakable might be another Losing Hope where it’s more emotional than the original book. The history of this story makes everything magnified. So either way, I’m in.

Easy was a quick read. I blew through it in a little over 24 hours. I was hooked emotionally. And I loved every minute of it. Easy gets 5 Stars from me. Have you read Easy? What did you think? Let me know!

*Since writing this review, I've read Breakable...and it is a retelling, but more. It also includes flashbacks from the past. Review of Breakable to come.