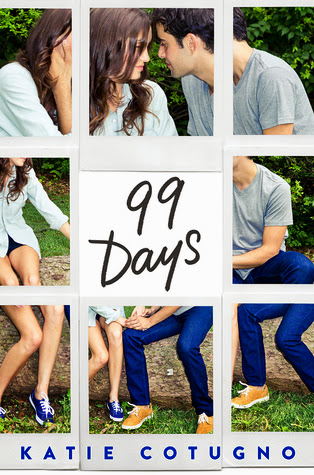 Goodreads description--Day 1: Julia Donnelly eggs my house my first night back in Star Lake, and that’s how I know everyone still remembers everything—how I destroyed my relationship with Patrick the night everything happened with his brother, Gabe. How I wrecked their whole family. Now I’m serving out my summer like a jail sentence: Just ninety-nine days till I can leave for college, and be done.

Day 4: A nasty note on my windshield makes it clear Julia isn’t finished. I’m expecting a fight when someone taps me on the shoulder, but it’s just Gabe, home from college and actually happy to see me. “For what it’s worth, Molly Barlow,” he says, “I’m really glad you’re back.”

Day 12: Gabe got me to come to this party, and I’m actually having fun. I think he’s about to kiss me—and that’s when I see Patrick. My Patrick, who’s supposed to be clear across the country. My Patrick, who’s never going to forgive me.

I wasn’t sure when I requested 99 Days. "Love triangle" glares from the description. Granted at least there’s a heads up about that. And brothers no less. But love triangles can go either way for me. Some people out and out hate them. I don’t. They just have to be done right for me to enjoy them. So that leads to the question of whether or not 99 Days had a love triangle done right or not. Well…I’ll tell you.

Everything about 99 Days had me flip-flopping. From “this book is better than I expected” to “this book is disappointing me.” Let me start with Molly. Molly messed up, right? She hooked up with her boyfriend’s brother. It doesn’t get much worse than that. Especially when you’re really close to the entire family and have been your entire life. So Molly feels all this guilt over what happened. She feels like she deserves to be treated badly and punished for her part in the fiasco, but at the same time Molly has a victim mentality. All she can see is how she’s being treated. She can’t open her eyes to see past herself to see how she’s treated and is still treating others. Her constant victim thought process was extremely draining for me. Yet, who hasn’t done something that they feel guilty about and wish they could take back? I know I have. But the worst thing that annoyed me about Molly was that this entire book was about her repeating her mistakes. It didn’t seem like she learned very much from them the first time through.

I flip-flopped on which guy I was rooting for. On one hand, the description and even most parts of the book seem to indicate that Molly and Patrick have a really deep connection that has spanned years and years. One of those star-crossed-lovers-no-one-else-will-ever-come-close relationships. I understand that Patrick’s hurt. He’s been betrayed twice. Not just by Molly, but by his brother as well. No one can blame him for feeling the way that he does. At the same time Patrick lashes out in retaliation. He wants Molly to hurt like he’s hurting. But there’s a part of him that wants her back too. I just couldn’t condone his behavior even when I understood it. At the same time, there’s Gabe. He’s the only person who is nice to Molly when she gets back to town. It’s obvious that he still has feelings for her—or that new ones are developing. But there’s something off there as well. Molly keeps describing his kisses as “warm and friendly.” It’s hard for me to root for “warm and friendly”. I mean those are good traits, but they also seem to be lacking as well. There’s an additional aspect having to do with Patrick and Gabe and brotherly love competition that kept me from rooting for Gabe at the same time.

It didn’t take me long to realize that there would be no ending to 99 Days that I would be happy with. Ultimately, this is one of those “coming of age” stories where when I’m finished reading it, I ask myself “what was the point of this book?” and the only thing I can come up with is that Molly learned a lesson. These are not my favorite kind of stories.

99 Days drew me in more than I expected it to. I wanted to keep reading. But I had frustrations with it as well. Aside from flip-flopping on how I felt about the major events and characters, there were also things like name dropping (Ex: J. Crew, Game of Thrones, Kings of Leon, etc). 99 Days also had at least two phrases that I think should be banned from YA literature for overuse—one of which was used three times. It’s the little things, right? But here’s a little thing that’s a positive: after everything went down with Molly and Gabe and Molly leaves for boarding school, she gains weight. Weight gain is a typical sign of depression, which I would say Molly was definitely experiencing, and I loved how this was weaved into the story.

Ultimately, I’m up in the air about how I feel about this story. There were aspects that I liked better than I was expecting, and there were aspects where I was disappointed. I can’t say that I would really go about recommending 99 Days though since I ended up feeling like “what was the point?” after all was said and done. I’d give 99 Days 3 Stars, but I can’t say I’d recommend it to others. Have you read 99 Days? What did you think? Let me know!