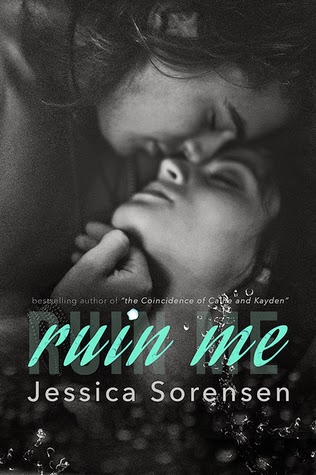 But Jax has other ideas.

The moment Jax met Clara he was instantly drawn to her wittiness, confidence, and gorgeous smile. Even though he agreed to the friends with benefits arrangement, he secretly hopes for more than their weekend hook ups.

When Jax's estranged mother mysteriously disappears, he sees an opportunity to spend more time with Clara. After convincing her to return home with him, a new agreement is made. One road trip and week together to find out why his mom vanished into thin air.

Things are about to get complicated.

Jax is Avery’s brother from Wreck Me. He didn’t have a huge role, but he was a fairly prominent side character. Even still, it was obvious that he was a great character and one that I wanted to know more about. Jax was always helping Avery with Mason, and Jax basically looked to Avery as his mother figure since their mom was a drug addict. Needless to say, there’s a lot to explore here.

Jax and Clara have a friends with benefits relationship that is more benefits than friends. I struggle with relationships where the physical has a better foundation than (or sets the foundation for) the emotional aspects. Clara doesn’t want more than the physical. She’s struggling to balance school, taking care of her mother who has brain damage from a car accident, and paying the bills. So Clara doesn’t think she really has time for another more. Jax, of course, wants more from day one. If I read a book where the physical relationship is well established before the emotional, I tend to prefer these to be books where the male in the relationship knows he wants more than the female. Even though this is backwards from what you normally think, I like it because I always want to root for the good guy. That’s more believable to me (even though I do love a hot, bad boy turned good).

Jax receives a disturbing phone call from his mother. She basically tells him she’s afraid that this drug dealer is going to kill her because she owes him some money. Jax can’t just ignore that. So even though his mother has never done anything for him, he sets out to find her. And he miraculously talks Clara into going on the trip with him. But Jax isn’t being completely honest. He’s hoping that this trip will bring them closer. He’s hoping that Clara will let down her guard and let him in a little. Of course, that’s essentially what happens.

Jax and Clara were both easy to read from. They both had a lot of past history that Jessica Sorensen explored. Each was likeable in their own ways. But the conflict of this story just wasn’t up to par. The confrontation with Jax’s mom was so easy, and Jax was all of a sudden able to move on with his life. Clara’s idea that her past and what she's currently dealing with would cause Jax to “run away” was so ridiculous considering everything that Jax has shared with her about his own history and past. Clara’s life doesn’t compare to what Jax has gone through. And to throw in the past boyfriend that left her and thus being her number one fear of letting Jax in just didn’t logically make sense.

-“If you don’t like my cockiness, then you should probably lay off with the staring. Seriously Clara, you’re stroking the crap out of my ego.”

-“You keep saying things that give me hope.”

Ruin Me was good for the mood I was in. I wanted light and quick. Even though the subject matter was kind of heavy, it was nothing compared to the earlier Nova books. I did have a few issues, namely the conflict. It was just too easy which is often a complaint of mine with Jessica Sorensen books. Ruin Me gets 3 Stars. Have you read Ruin Me? What did you think? Let me know!