The Secrets of Attraction - Review 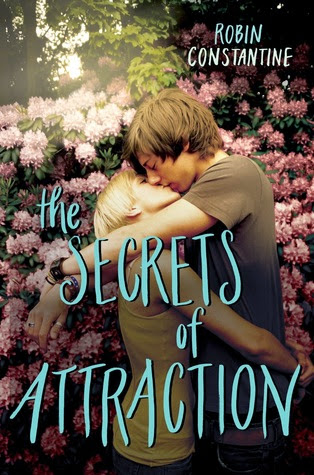 Goodreads description--Set in the same world as The Promise of Amazing, this smart, surprising, and romantic follow-up to Robin Constantine's debut novel follows two New Jersey teens as they become friends and fall in love. Perfect for fans of Stephanie Perkins, Sarah Mlynowski, and Jennifer E. Smith.

Madison Pryce thinks she's got everything figured out—she's working on a portfolio for a summer art program and hanging with her friends. Plus she has her hot boyfriend, Zach. But then a visit from a family friend turns Maddie's life upside down.

Jesse McMann is still reeling from a breakup that shattered his heart and his band. Then pride (and some goading from his bass player and fellow barista) forces him to find a new drummer—and the inspiration to write music again.

Kismet arrives in the unlikely form of Grayson Barrett, who tries out for Jesse's band, and whose girlfriend is BFFs with the cute girl who orders a chai latte after yoga every Thursday: Maddie. What Jesse and Maddie thought they knew about the secrets of attraction and the rules of romance changes once they start falling for each other.

The Secrets of Attraction has just about everything I’m looking for in a young adult contemporary read. I feel like the description was a bit misleading even if pretty much everything it says is true. Isn’t it weird how the way facts are presents can change your perspective? Makes me worry about our justice system, but that’s a topic for a whole other corner of the internet.

Madison is a smart girl. She’s totally into art in an amazing way. Despite having a couple of mediums that she’s more interested in, I loved that Madison really looked at and picked up any opportunity she could to express herself through art. She’s done models, sketching, painting, graphics, hair, makeup, fashion, photography. I loved how passionate she was about her art. And as the description says she’s working to put together and expand her portfolio in order to get into a summer art program. She did have focus, but unlike the description, I wouldn’t say she has it all figured out. She’s actually a little on the confused and lost side of things. She has a boyfriend but she knows that her feelings aren't all-encompassing like she sees with her best friend Wren and her boyfriend Gray. And she has a close relationship with her mother but knows nothing about who or where her father is. I felt like a bit of her reluctance to commit came from her background with her mother and missing father.

Side note, Madison takes yoga classes and man if The Secrets of Attraction didn’t make me want to sign up to take classes myself.

Jesse is seriously everything you can want in a young adult leading male character. He’s in a rock band. He’s uber-talented. He plays guitar like only a natural can, and he even writes his own songs. He works a part-time job at a coffee shop. And he’s had his heartbroken. Jesse’s ex-girlfriend, Hannah, slept with his best friend and fellow bandmate, Duncan. Now Hannah & Duncan are an item and Jesse is trying to recover from the betrayal all around. But Jesse’s desire to get Hannah back in the beginning of this book really bothered me. Don’t get me wrong, I love a story about forgiveness, and I really admire and praise when a character can rise above and offer that grace and mercy to someone else. But Hannah wasn’t seeking his forgiveness—only his acceptance. So how Jesse thought and felt about Hannah was sometimes hard for me to get behind.

Jesse and Madison have a slow building relationship. They both bring a bit of baggage to the table—but in real life, who doesn’t? I also liked how Madison doesn’t agonize over being away from Jesse for the summer. She still plans on doing her summer art program no matter what. I did find it a bit odd that there really wasn’t any thought put into what Jesse will be doing in the future. I guess he’s aiming for a band/music related future, but it was never specifically stated.

If I had to complain about one thing, I’d really have to tackle the slang modern-day speech. It wasn’t all the time or so much that I just had to roll my eyes, but there were a few times when it bugged me. This was just something I mentally noted and moved on. Oh and Madison’s mom was really annoying to me. Her reasons behind her actions were NOT justified. She felt almost more immature to me than Madison did. I don’t want to say too much around that because I don’t want to spoil anything.

-Money. The Grim Reaper of dreams.

-“I feel so small—like when I’m sitting here and looking up, I realize that nothing is ever still, those stars are constantly imploding and dying and new ones are born, and we’re on some spinning hunk of rock in the middle of the galaxy and when you look at it that way, […], you realize how insignificant we really are, and it’s scary, but then you wonder, how can we be alone? It’s pure arrogance to think we’re all alone in the universe, and it’s a nice thought—the not being alone” {I realize he’s talking about aliens, but I related this to God.} … “Well, when I’m playing…when I close my eyes, it’s like for a split second, just a sip of time, I understand stuff and I’m part of everything. And I know there’s something more—can physically feel connected to it, can feel it going through me. So that’s it, that’s where I go…”