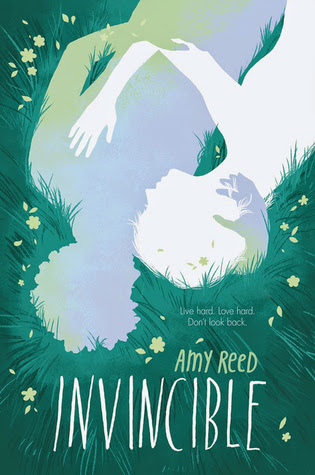 Goodreads description--Evie is living on borrowed time. She was diagnosed with terminal cancer several months ago and told that by now she’d be dead. Evie is grateful for every extra day she gets, but she knows that soon this disease will kill her. Until, miraculously, she may have a second chance to live.

All Evie had wanted was her life back, but now that she has it, she feels like there’s no place for her in it—at least, not for the girl she is now. Her friends and her parents still see her as Cancer Girl, and her boyfriend’s constant, doting attention is suddenly nothing short of suffocating.

Then Evie meets Marcus. She knows that he’s trouble, but she can’t help falling for him. Being near him makes her feel truly, fully alive. It’s better than a drug. His kiss makes her feel invincible—but she may be at the beginning of the biggest free fall of her life.

I made it slightly over 40% into Invincible when I decided to DNF it. DNFing is still not easy for me, and especially being 40% in made this a difficult decision. I’ve never had cancer. I can’t begin to say that I know by even the slightest stretch of my imagination what it would feel like to be diagnosed with cancer. So the description of this book drew me in. Yeah, it makes sense that having been through something as traumatic and life-changing as surviving cancer—especially miraculously when everyone included you didn’t think you would make it—would make it impossible to return to your prior life. The things you cared about before just don’t seem that important in the grand scheme of life and such. And having been through so much it would make sense that Evie needs to feel alive more now than ever before. I can see that causing her to do some risky things—including date a potentially dangerous guy or bad boy. That’s what pulled me in. But that’s not exactly what happened (at least up until the point I decided to DNF).

The beginning of Invincible is a period of time referred to as “then.” Evie’s recently broken her leg and discovered that her cancer has even made it into her bone marrow—not a good prognosis. Her doctors offer a 4-7% survival rate if she signs up for a clinical trial. So her situation is pretty dire. In the hospital she’s made friends with two other patients, Caleb & Stella. Caleb and Stella are the only ones in her life who can remotely relate to what she’s going through and what she’s been through. Her parents, her pre-cancer best friend, and her boyfriend just don’t get it. They hover. They care. But they don’t get it. This part I could relate to and I was interested in. But then something happens.

Evie is declared pretty much cancer-free just about the same time as a traumatic event takes place. I can’t begin to say that I know what the grief Evie feels is like. But Evie just turns into such a brat after this. The description says that Evie is grateful for every extra day that she gets, but that’s bull. Evie was the most ungrateful person. She even says: “I know I should be grateful I’m alive. I should be grateful for my mom and her car and the stupid hospital and doctors and their great medical training. I should care about the orphans. I should care about something, anything. But I don’t.” More than anything I was screaming at Evie to quit her whining. To snap out of it. To have a perspective change. Maybe I haven’t been through cancer, but my cousin has. And you guys I have never in my life seen someone go through something like she did and maintain such a positive attitude. I know there were times when she was down and depressed and overwhelmed. I know she had to fight the mental battles just as frequently as the physical ones. But I saw her time and time again be grateful for the little things. And in the end, my cousin didn't make it. Yet even in death she remains a symbol of hope to all who knew her. So I want to say that it’s a slap in the face to everyone who hasn’t been miraculously healed of their cancer, but then I remind myself that Evie isn’t a real person. As I said, I can understand how she would still be struggling mentally and emotionally. She’s been through a lot. But that doesn’t mean it was enjoyable for me to read.

When it got to the point where “DNF this book” first entered my mind, I thought that I’d come too far. So I tried to press on. I read some more. And the more I read the angrier I got. I kept telling myself that surely Evie learns all of these important and deep life lessons. There has to be a reason why Caleb has faith in God and Evie was “miraculously” healed other than for Evie to throw it back in God’s face. There has to be some redeeming elements of this book. So I decided to do something that I never do. I went to Goodreads to check out the reviews. And there weren’t many. But the ones I saw…well they offered me no real hope for Evie or Invincible to have a redeeming ending. With that being said, I decided to DNF, and the sigh of relief I felt upon making that decision was big enough to validate my decision.

Have you read Invincible? What did you think? Let me know!