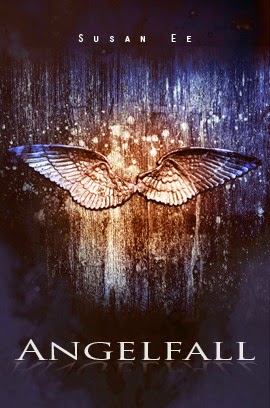 Goodreads description--It's been six weeks since the angels of the apocalypse destroyed the world as we know it. Only pockets of humanity remain.

Savage street gangs rule the day while fear and superstition rule the night.

When angels fly away with a helpless girl, her seventeen-year-old sister Penryn will do anything to get her back...

Angelfall has been on my TBR list for years. Due to the release of End of Days, Angelfall and World After were both available for review through NetGalley, and I snatched them both up. And I’m so glad that I did. I hate that I didn’t get End of Days, but you know how that goes.

Angelfall starts out with Penryn, her sister Paige, and their mother. The world has been taken over by angels. The angels have caused a lot of destruction and a whole lot of death. So when Penryn & family witness an angel’s wings being cut off by some other angels, it surprises everyone that Penryn jumps in to save the angel. Really she’s hoping to cause a distraction so her mother and sister can escape. While Penryn is trying to save her family, Paige is trying to save Penryn which results in Paige getting kidnapped by one of the angels responsible for cutting the wings off the other angel. What happens is that Penryn ends up with this dying angel on her hands, her sister is kidnapped, and her mother is missing.

Angelfall reminded me a lot of Under the Never Sky. For one, Penryn and Raffe would consider themselves enemies—or at the very least, not on the same side at all. Yet, they end up on this journey together. Penryn is trying to find her sister, and Raffe needs to get his wings sewn back on. Enemies become unlikely, temporary allies. Having someone’s back on a journey because you need them for some task or end result leads into some gray territory. And when someone saves your life (multiple times), I imagine that you can’t help but form some kind of trust in them.

Raffe and Penryn run into a camp of resistors trying to organize the remaining human race into a unified attack against the angels. Raffe has to keep his angel identity a secret, but it’s hard not to root for this camp at the same time.

I loved the slow build to Penryn and Raffe’s relationship. Penryn isn’t sure where they stand for the majority of the book. They have this tenuous relationship. Trust isn’t solidified. And I loved it. The uncertainty of how the other person feels makes for one of my favorite story dynamics. Raffe knows what happens to angels who fall in love with humans, and even more than that, he’s witnessed what happens to the humans who fall in love with angels. So now you add forbidden to the potential romance mix. Raffe can’t let anything happen between them no matter what either of them thinks or feels.

Of course there’s more going on beyond the romance in the story. What’s happened to Paige? Is she still alive? And if she is, will she ever be the same? Why did another angel cut Raffe’s wings? And why are the angels the bad guys? Will the Resistance make any headway?

I will say that I don’t love the idea of angels being the enemy. There’s a difference between angels and demons and for an angel to be agnostic is just beyond incomprehensible for me. So I found that to be slightly annoying. And then similar to the direction of Supernatural, it seems like God is MIA. I realize that this is a fictional story, but I’ve been less and less tolerant to anything that feels irreverent to me lately.

-Forget plans. I don't have enough information to formulate a plan. My instincts will have to do. And my instincts tell me that Raffe is mine.

-"My friends call me Wrath," says Raffe. "My enemies call me Please Have Mercy."

-It seems to be our fate to continually pass our debt back and forth.

Angelfall was such an enjoyable read for me. In the middle of the biggest reading slump I’ve experienced since I started blogging, Angelfall was a light in the dark. It was easy to get through and a quick finish for me. I enjoyed the slow build of Penryn and Raffe’s relationship and that they even still have much further to go. I enjoyed the other mysteries going on as well. I look forward to continuing the series and will be picking up World After as soon as possible. Angelfall gets 4 Stars. Have you read Angelfall? What did you think? Let me know!