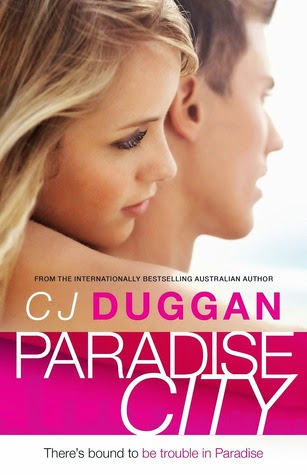 Goodreads description--There's bound to be trouble in Paradise . . .

When her parents decide a change will be good for her, seventeen-year-old Lexie Atkinson never expected they'd send her all the way to Paradise City. Coming from a predictable life of home schooling on a rural Australian property, she's sure that Paradise will be amazing. But when she's thrust into a public school without a friendly face in sight, and forced to share a room with her insipid, hateful cousin Amanda, Lexie's not so sure.

Hanging out with the self-proclaimed beach bums of the city, sneaking out, late night parties and parking with boys are all things Lexie's never experienced, but all that's about to change. It's new, terrifying . . . and exciting. But when she meets Luke Ballantine, exciting doesn't even come close to describing her new life. Trouble with a capital T, Luke is impulsive, charming and answers to no one. The resident bad-boy leader of the group, he's sexier than any boy Lexie has ever known.

Amidst the stolen moments of knowing looks and heated touches, Lexie can't help but wonder if Luke is going to be good for her . . . or very, very bad?

My experience with CJ Duggan books up until Paradise City have all been very pleasant. I’ve read 3 of her books from the Summer series (The Boys of Summer, An Endless Summer, and That One Summer) and I cannot wait for the last book in the series to publish. So when I saw that she had a new series coming out, I knew that I wanted to jump on it.

The description of Paradise City had me thinking that Lexie was being sent off to boarding school. Maybe I assumed that because Amy from An Endless Summer was sent off to boarding school. But actually Lexie’s parents allow her to live with her aunt and uncle during the remainder of the school year. She’s a Junior (year eleven), and they wanted her to get acclimated and see if she likes the school before her senior year (year twelve). Amanda, her cousin, and Lexie used to be friends when they were younger, but when Lexie shows up and ends up sharing a room with Amanda, Lexie quickly sees that things aren’t as they used to be. Amanda thinks Lexie is going to cramp her style and so they start off with a rocky relationship.

Truthfully guys, I had a really hard time connecting in this book. I was 40, 50, maybe even 60% in before I really started getting hooked. The buildup and set up took a really long time, and for the first 40-50% nothing really happened. This was really disappointing to me considering my past experience with CJ Duggan’s books. Her other stories have all had a slow-burn romance, but none of them have waited so late for the action to begin.

On top of that, I had trouble connecting to Lexie herself. She pretty much develops a crush on Luke Ballantine immediately and based on looks alone. I mean she’s crushing major through 50% of the book with their biggest interaction being a few moments of eye contact and a borrowed pen. I told my sister that I remember being like that…..IN ELEMENTARY SCHOOL! Granted, Lexie comes from being homeschooled in an extremely rural area so I imagine male interaction was at an extreme minimum for her. But this was painful at times to go through with her. And so I essentially felt like there was no real basis for her feelings for Luke other than the fact that he was cute. Luke eventually wins me over when it comes to personality the more I experience of him as a reader, but the things I focused on weren’t really the major things that Lexie focused on—at least not when it came to developing her feelings.

Some quotes to back me up:

-It was then I wondered what had me so desperate to want to be around him, what was it about him that intrigued me more than anyone else?

See Lexie doesn’t even know why she likes him.

-…there was a happiness inside of me that bubbled to the surface, a ridiculous satisfaction knowing that my pen was participating in some small way.

Seriously? How old is she? “He’s touching my pen. The same pen that I will touch again later! Oh my! *swoon*” I’m not even sure I can say that I’m exaggerating here.

-I had hoped beyond measure that Amanda would speak of Ballantine’s undying infatuation with me….

Maybe Lexie was just a bit dramatic for me. I did notice that Lexie’s inner voice was often very timid and scared and lacking confidence, but this was at odds with her behavior. She often spoke and acted bold and risky. I know there’s probably a level of overcompensation to be accounted for, but more than feeling like she was overcompensating, I ended up feeling like her character was inconsistent.

In an attempt to draw Ballantine in and make him jealous and thus spark him into action towards claiming Lexie as his own, Lexie and her friend Laura plant a spark of rumor about Lexie hooking up with another guy. But they picked the one and only guy who Ballantine could have possibly believed capable. This was two-fold. It did in fact spark Ballantine to action, but it also planted a seed of doubt that he truly had difficulty overcoming.

In the end, Paradise City had a bit of a cliffhanger. I wasn’t expecting book 2, Paradise Road, to follow up on Lexie and Luke’s story. I was expecting to swap to one of the other couples—Amanda and Boon or even Laura and someone—like the Summer series did. But it looks like book 2 will definitely be a continuation of Luke and Lexie’s story. I can’t say that I loved Paradise City, but I was left wanting to know how it all ends, so I’ll definitely continue the series with hopes that the CJ Duggan I really enjoyed from the Summer series will be back in full force. Paradise City gets 3.5 Stars. Have you read Paradise City? What did you think? Let me know!