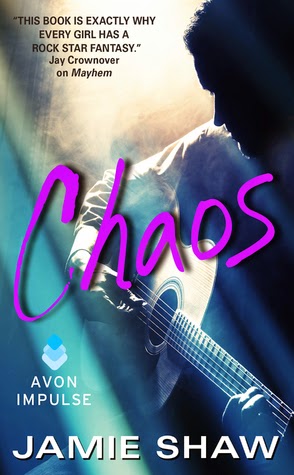 Shawn has been one of my favorite characters of the Mayhem series from the beginning so I was excited to finally get to read his book. (Although I'm probably most interested in Mike's story.) I enjoyed how Riot really set up things for Shawn and Kit. We're introduced to Kit in Riot and we even find out about how she and Shawn shared a night back in high school. Yet I feel like Riot and the description of Chaos made it seem like Kit had some plan to win Shawn's affections only to make him "eat his heart out" by revealing that she was only in it for revenge, but that's just not how things go.

As the description says, Kit did basically fall in love with Shawn when she was fifteen, but in that obsessive, love-you-from-a-distance kind of way you do at that age. She started playing the guitar because of him also, but he broke her heart. She thinks she's moved on, but the pull she feels toward him is even more genuine the more she gets to know the real Shawn.

Shawn's been around over the last two books, but it was nice to see that he didn't take that same approach once Kit appeared on the scene. I'm not entirely sure if that's because he was attracted to her from the beginning or because he was trying to be respectful of having a girl in the band, but either way, it was nice to see him control himself. We learn a good bit more about him with seeing how much he organizes things for the band. It's almost like he's the manager as well as a member of the band. Plus he writes songs as much as Adam. Very attractive. And I have to give him props for not rushing things with Kit even when there were a couple of times that he probably could have.

From a logistical standpoint, Chaos has a lot of f-bombs. They are a rock band. And Kit is surrounded by older, domineering brothers. So be aware of that. Although, I did feel like the physical scenes were toned down from what I expected. Or maybe just coming off Joel and Dee it felt like Shawn and Kit's story didn't revolve around the physical as much. I will say that although I liked Kit's twin relationship with Kale and even her relationship with all of her brothers, I wish we didn't have to delve so much into what was going on with Kale.

The only quotes I highlighted were about Mike, but I'll share my absolute favorite one:

-"Look...when I meet my wife, I don't want to have to explain to her why I slept with a hundred chicks before I met her, okay?"

Amen, Mike! Amen! I can't wait to read his story.

I picked Chaos up when I did because I needed to follow up a more weighty book with something that I could read quickly without too much heaviness. Chaos fit the bill. It was exactly what I needed at the time. Chaos gets 4 Stars. Have you read Chaos? What did you think? Let me know!