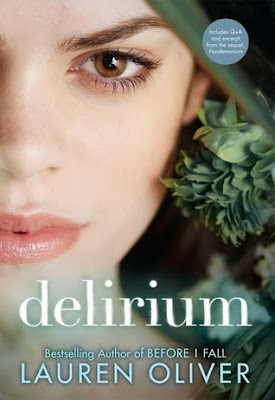 Goodreads description--Ninety-five days, and then I’ll be safe.

I wonder whether the procedure will hurt.

I want to get it over with.

It’s hard to be patient.

It’s hard not to be afraid while I’m still uncured, though so far the deliria hasn’t touched me yet.

They say that in the old days, love drove people to madness.

The deadliest of all deadly things: It kills you both when you have it and when you don’t.

Oh boy guys...what to say about Delirium other than "read this book!"???

The concept of love being considered a disease by an entire society was such a unique concept that I was pretty much captivated from the first page. Of course, because this concept is so "out there" I was being a little over analytic with the logistics of it all. But eventually, I was able to just shut that part of my brain off and dive into this interesting and truly sad concept of a world that Lauren Oliver created. A world without love....can anyone truly imagine it?

Lena starts out as a strict rules-follower type of person. She's had too many experiences in the past that haunt her concerning those who try to break the rules--those who fought for love. And after seeing what those people have gone through, the very idea of the "disease"--the deliria--terrifies Lena. She absolutely cannot wait until she turns eighteen so that she can receive the cure. But genius is not needed to know that Lena has quite a wild ride ahead of her.

Initially, I was almost more intrigued by Hana's character than by Lena. Hana is always pushing the edge of what's been deemed appropriate by the government and what her heart calls out to her. Hana and Lena go through a lot throughout the entire story unfolding in Delirium, and I loved how they could be at odds with each other and return back to a place of love and devotion to each other as true friendship allows.

Alex confused me at first because he wasn't really what I was expecting. In the end he lived up to be everything I hoped for. He is the catalyst for so much change within Lena and I don't think we've even seen how far the reach of the ripples that he's caused for Lena and even other secondary characters as a result. I can't wait to find out more.

After reading a couple of books where I felt like the writing was immature (that's the best word I can think of right now), but having a hard time explaining what I meant by that, Delirium was so easy to pick out as being excellent writing--lyrical and poetic. Beautiful. I actually listened to the audio version of this book, read by Sarah Drew. She did an excellent job. She was dramatic and intense and I felt my heart pounding my chest during certain parts of the book. The intensity that she put behind her narration was just what this book called for. Though sometimes Sarah Drew's narration for Alex was slightly off-putting, the rest of the story and the performance was spot on.

Some of my favorite quotes (*note because I listened to this book in audiobook version, it's almost impossible for me to quote directly, specifically punctuation, etc. I did the best I could. And I definitely can't site the location.):

"You can't really be happy unless you're unhappy sometimes." - Hana

"The secret to talking to boys--you have to be angry all the time." - Lena

"And then my eye went full flutter." -Lena - Ok this one you have to know the context, but trust me...it's hilarious, especially if you've ever had an eye twitch due to stress.

"Apparently the disease turns you into a world class liar." - Lena

"Without love there could be no hate. Without hate, no violence." - Lena followed up by "Hate isn't the most dangerous thing. ...Indifference is." - Alex

Delirium is a must read in my opinion. Full of beautiful prose, intense pacing, and original in concept. I'm giving Delirium 4.5 Stars. Have you read Delirium? If so, what did you think? Let me know!