From the Ashes - City of Bones

In light of the upcoming movie, City of Bones is my pick for this From the Ashes post. City of Bones, the movie, is set to release August 21, 2013. And I have to say that it looks pretty good to me. 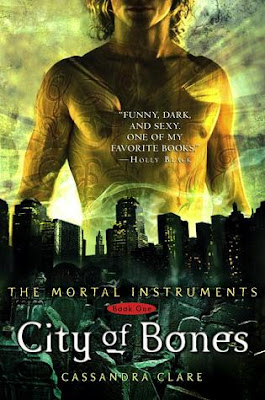 City of Bones (The Mortal Instruments, # 1)

Goodreads description--Don’t miss The Mortal Instruments: City of Bones, soon to be a major motion picture in theaters August 2013.

When fifteen-year-old Clary Fray heads out to the Pandemonium Club in New York City, she hardly expects to witness a murder -- much less a murder committed by three teenagers covered with strange tattoos and brandishing bizarre weapons. Then the body disappears into thin air. It's hard to call the police when the murderers are invisible to everyone else and when there is nothing -- not even a smear of blood -- to show that a boy has died. Or was he a boy?

This is Clary's first meeting with the Shadowhunters, warriors dedicated to ridding the earth of demons. It's also her first encounter with Jace, a Shadowhunter who looks a little like an angel and acts a lot like a jerk. Within twenty-four hours Clary is pulled into Jace's world with a vengeance, when her mother disappears and Clary herself is attacked by a demon. But why would demons be interested in ordinary mundanes like Clary and her mother? And how did Clary suddenly get the Sight? The Shadowhunters would like to know. . . .

Exotic and gritty, exhilarating and utterly gripping, Cassandra Clare's ferociously entertaining fantasy takes readers on a wild ride that they will never want to end.

I'm actually extremely surprised that this is only my second time reading City of Bones. When I first started reading (post high school), I re-read almost everything I could get my hands on, and that was mostly because I didn't have the circulation of books surrounding me that I do now. City of Bones, and The Mortal Instruments in general, is definitely one that fits into the category of needing to be re-read multiple times. Since I've started blogging though, I feel very pressured to read "new" (to me) stuff so that I can review them on the blog. I don't have unlimited time available to me to read, so I do the best that I can. However, with the recent development of my "From the Ashes" feature reviews and with the upcoming movie release of City of Bones, I felt that it was past time that I take a second look at City of Bones.

One thing is for sure, I didn't have the details of City of Bones down as much as say Twilight or Vampire Academy--series that I've read upwards of 5 times or so. I had forgotten that Clary was fifteen at the beginning of City of Bones; however, she does turn sixteen during the book. And considering the book only spans about a week or so of time, that's not so bad. The beginning of the book was more confusing to me ironically enough because I remembered thinking that the "blue-haired-boy" wasn't really important from my first time reading it, being only a catalyst, but when Cassandra Clare switches to write from his POV, I was thrown off and thought for a second that maybe Jace had glamoured his hair blue or something. But obviously quickly figured things out. I felt a bit daft for a minute or two though.

Clary is a fairly strong leading lady. She doesn't have the fighting skills of Isabelle or Rose from Vampire Academy, but she has a quick mind and she stands her ground when it becomes necessary. Though reading through the book for a second time, I picked up on her jealousy of Simon's interaction with Isabelle and things like that more than I picked up on her developing attraction to Jace. I did notice more of Jace letting down his guard around her. He might be in the middle of being a jerk, but would stop to ask her if she were okay or place his hand on the small of her back--something to indicate that she was bringing him out more than you would expect.

Speaking of Jace, he's still one of my favorite characters. Between Jace and Will of The Infernal Devices, I tended to lean toward Will. Because truth be told, I like strong and dark a bit better than strong and blond (or golden as Jace is often described). But this time through, I found myself marking many passages where I just couldn't get over his sarcastic humor. I remember not understanding the Jace toward the end of the book. And can't say much about that without spoilers, but I was perhaps even more frustrated with it this time around while at the same time understanding it more. Does that make any sense?

I loved re-experiencing the other characters as well. Simon's quirky-nerdy self. Isabelle, who I originally read much meaner than I read her this past time, was awfully friendly to Clary all around, even when dealing with a bit of the female jealousy that's known to exist among our sex. I can't say I liked Alec any more this time around than I did the first time. And after having read about the close relationship that Will and Jem have from The Infernal Devices, it was hard for me to actually see or feel the parabatai bond/relationship between Jace and Alec in City of Bones. Maybe that will shine through more in the remaining books, but I can't really remember. And then there's Magnus Bane.

Oh Magnus, even when you frustrate the crap out of me, I still find myself cracking up at your jokes, your hilarious outfits, and your centuries-worth-of-being-alive wisdom. (Yes, I talk to these characters as if they're real people. So what?) I feel like I understand Magnus so much more from having read both The Mortal Instruments and The Infernal Devices. He's seen and experienced so much. (Kind of off the subject, but one of my neighbors has a Great Dane named Magnus. I call him "Magnus Bane, the Great Dane." Totally cheesy.)

Obviously, the ending to City of Bones completely blew me away my first time reading it. And truth be told, I wasn't sure I wanted to keep reading the series after that. While I won't include any spoilers, I will just say to anyone who might not have read The Mortal Instruments yet, keep reading. Just trust me. But since this wasn't my first time through, I must say that I was still left with a despair that these characters must be feeling. Yet, I felt like Clary handled the situation much better than I remembered, and much better than I think anyone could have expected.

I would be remiss if I concluded a review of this book without discussing the wonderful world that Cassandra Clare has created. Demons, vampires, werewolves, half-angel/half-human demon fighters, mundane humans...they all fit together into this world that is beautiful and intriguing. And I for one am thrilled to have not only The Infernal Devices as a spin-off series so that I can remain in this world a little longer, but I'm also thrilled about the upcoming The Dark Artifices spin-off series so that I don't have to worry about leaving this fantasy world any time soon.

Because I can't really talk about The Mortal Instruments without discussing The Infernal Devices to some extent, I can see so clearly how Cassandra Clare had not only the entire series planned out in her head from the beginning, but also at least a good portion of The Infernal Devices planned out as well. If that's not the case, then she's just brilliant about going back to the beginning of her story and tying in pieces that I would have never put together. She uses some of the smallest foreshadowing details that make the story that much better. ****Minor spoiler alert for Clockwork Princess (book 3 of The Infernal Devices): I was even wondering this time through why Alec has the dark hair and blue eyes that we find in the characteristics of Will when Will wasn't related even distantly to Alec. Will's sister, who just so happens to look just like him, is. Brilliant, I tell you. **End spoiler.

I gave City of Bones 4 stars on Goodreads when I first added it to my read-shelf, and upon my second reading, I find that this rating stands for me. Any reader who enjoys a well built world and a story that is worked and weaved like a tapestry from beginning to end will appreciate City of Bones and The Mortal Instruments. Have you read City of Bones? What did you think? Let me know!

Oh and here's the trailer for the movie coming out next week. There are longer trailers and such too if you want to look them up.