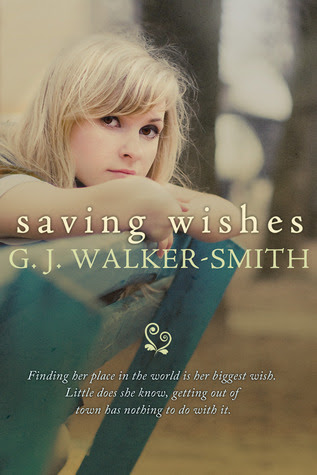 Goodreads description--For Charli Blake, being seventeen is a tough gig.

She's been branded a troublemaker, her reputation is in tatters and she's stuck in Pipers Cove, a speck of a town on the coast of Tasmania.

Thankfully, it's temporary. Her lifelong dream of travelling the world is just months away from becoming reality. All she has to do is ride out the last few months of high school, which is easier said than done thanks to a trio of mean girls known as The Beautifuls.

When Adam Décarie arrives in town, all the way from New York, life takes an unexpected turn. His arrival sets off a chain of events that alters her life forever, convincing her of one thing. Fate brought him to her.

Saving Wishes is the story of a girl who doesn't quite fit the life she's living, and the boy who helps her realise why.

Let's see. First off from reading the description above, two things stuck out to me. 1) The trio of girls called The Beautifuls--cliche much? 2) Fate. So many people have issues with the insta-love that happens so often in YA, specifically paranormal YA. In the past I used to love insta-love and relationships brought together through fate. After reading so many of these and knowing that real substantial relationships are built off of learning things about each other, sharing with each, growing with each other, etc., this aspect of Saving Wishes wasn't something I was looking forward to.

While "The Beautifuls" did end up being the cliche group of mean girls, the name is sarcastic because they're really not all that beautiful physically. And while fate definitely plays a role in the relationship between Charli and Adam, their relationship isn't solely based off that.

Charli is quirky. She believes in fate and magic, faeries, and world changing events. But she's also almost incapable of behaving for any length of time. Charli made a bad decision a while back and while that decision has affected her reputation, I never felt like this played out as the description indicates that it would. Adam, while not initially being a believer of fate, magic, and faeries, is ironically the one who seems to deal more with the insta-love issues.

And while Charli and Adam have a whirlwind romance, it's inevitable that tough choices lie ahead. Adam has to go back to New York for school at some point. And what of Charli's plans of traveling the world with her best friend, Nicole? Charli can't abandon her after they've been planning this trip for somewhere around ten years. I enjoyed how these issues played into Charli and Adam's relationship because impossible decisions are real life. But Charli also has a tendency to drift into this characteristic that I'm really beginning to hate reading about--sacrificing herself and their relationship in order to "save" Adam. Another characteristic that I struggle reading about, comes in the form of characters who speak negatively to themselves, and Charli falls into this trap as well.

Adam's faith in Charli, in their relationship, and in the fate he's recently learned to believe in was refreshing in the midst of my struggles with Charli herself.

There are other struggles along Charli's way that deepen the story, including the strain and deterioration of her relationship with her best friend, living with her much older brother, a French teacher who seems to ride Charli pretty hard but also has a soft spot for her as well, among learning the truth about her mother and father. There's just a lot packed in and GJ Walker-Smith does a pretty good job weaving it all together.

I will say that I didn't love the ending. I mean there wasn't necessarily a cliffhanger, it just ended very abruptly. Luckily for me, the first three or so chapters of book two, Second Hearts, were at the end of my copy and so I got to see a little bit about what happens next and smooths the abrupt ending out just a bit.

Saving Wishes was a cute and fast read. While I had a couple of frustrations, they were all minor, and I look forward to seeing Charli and Adam's story continue to unfold. Saving Wishes gets 3.5 Stars from me. Have you read Saving Wishes? If so, what did you think? Let me know!