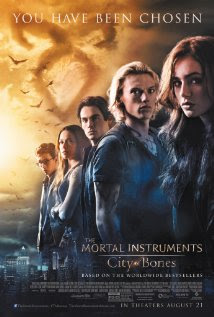 The Mortal Instruments: City of Bones

Written By: Jessica Postigo (screenplay), Cassandra Clare (based on the novel by)

Let me start off by saying that I go into any movie inspired, based upon, or made from a book expecting there to be differences. I've NEVER seen a book to movie adaptation where there weren't differences. And those differences can come in any number of variations from missing characters, meshed characters (meaning two characters turned into one), additional characters, changed scenes, missing scenes, and so on and so on. Sometimes the changes are due to money, time constraints, and various other issues of translating a book to the big screen. Because I expect these differences I don't tend to leave the movie disappointed because X character wasn't included in the movie or they left out X scene.

All of that being said, I actually think they did a pretty good job sticking to the book for the The Mortal Instruments: City of Bones. Of course, several things were different. They always are. They always will be. There was one line inserted into the movie that grated on me because of how much of the experience that line altered for the viewer, especially the viewer who has not read the books. But as irritating as that line was, I still feel like the rest of the movie outweighed the damage done with that line. So be prepared about that. And while that one line was the one thing I wish they hadn't decided to change (or in this case, include), I do think they can work around it in a way that doesn't completely ruin the experience, though the experience will be altered for the viewer who hasn't read the books.

Lily Collins did a great job as Clary in my opinion. I was expecting her to do well in this role, but she exceeded my expectations. And Jamie Campbell Bower, well he totally blew my expectations out of the water. I wasn't impressed with his performance as Caius in the Twilight movies, but to be fair, it's not like he had many lines or much screen time. But he's much skinnier than I pictured Jace, and I'm not really a fan of long hair typically. However, he totally pulls off the Jace sarcasm and one-liners in a way that I just wasn't sure he was capable of doing. Overall, I was super impressed. And even though he's majorly skinny, you'll also see how cut he is in one scene. Most importantly was the essence of Jace, and I really ended up being impressed with his performance.

The secondary characters were both good and unimpressive in varying degrees. I thought Robert Sheehan (Simon) did a decent job in some scenes, a really good job in other scenes, and then eh not so much in others. Isabelle (Jemima West) and Alec (Kevin Zegers) I was generally unimpressed with. Hodge, played by Jared Harris, was pretty much exactly what I pictured in my head. Lena Headly as Jocelyn did a decent job in my mind and goes to town with a refrigerator showing she hasn't lost all of her shadowhunter skills over the years. Jonathan Reyes Meyers does a decent job as Valentine. He's menacing and seductive when he needs to be. Truth be told, I could really only see King Henry VIII from The Tudors in his portrayal of Valentine. But whoever decided he needed those braids needs to be fired.

And then there's Magnus. I've heard differing opinions on Godfrey Gao's performance as Magnus. He truly didn't have much screen time all in all, but I was somewhat disappointed. I was hoping for more "umph" from his character. More outrageousness from his outfits (not wearing pants isn't not really the same thing as bright pink or neon green skinny jeans--not necessarily straight from the book descriptions, but something I could imagine him wearing with a matching shirt and perhaps scarf of some kind). And more of the blue sparks from his magic fingers. I get maybe that may fall into the category of the first paragraph I discussed above, but his character is just so out there. I'm hoping we see more in the future.

As far as special effects go, The Mortal Instruments: City of Bones was much better than our first Twilight installment. (I can't help but to compare it to Twilight and I think a lot of people will do the same.) I even jumped at the creepiness from some of the demons. I thought the effects and fight scenes were well done. Kudos.

There are a few cheesy things. One line in particular involving talk about seeing an angel and a trick using the portal. But nothing compared to cheesiness we've seen in past book to movie adaptations. And nothing close to overboard.

I'll definitely be purchasing this for my collection once it's out on DVD/Blu-Ray. And I'll probably try to go see it in the theater one more time as well. I don't think that The Mortal Instruments: City of Bones is getting the recognition that it deserves. And I hate to think that the other movies might not be made because it doesn't get the deserved press (City of Ashes is to begin filming next month to be released next year). I highly encourage fans of the book series to check out this adaptation as soon as you're able. There are some differences, but I think overall you'll be really impressed.

I'm rating The Mortal Instruments: City of Bones movie as 4 to 4.5 Stars. Have you seen the movie? What did you think? Let me know!

Check out my review of City of Bones (the book) as well.

Posted by Somewhere Only We Know at 5:56 PM