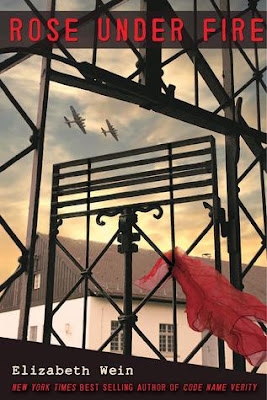 You guys, wow....just wow. I literally just finished Rose Under Fire minutes before writing this review and my thought process is all over the place. As someone who doesn't typically read much historical fiction, particularly from the time period of World War II, Elizabeth Wein is able to suck me into her stories of these magnificent female characters, chew me up, and then spit me out.

I said in my review of Code Name Verity that what I typically love to read is love stories, but what I've come to realize is that what I really love to read is a story that spark emotion within me. Obviously that's fairly easy to do with love stories. It's harder to do for me when it comes to a story about establishing other types of relationships and connections between characters. Elizabeth Wein has this down to a science. I don't know that I have ever cared so deeply for characters that aren't developing a romantic relationship as I have for the characters that she has created within both Code Name Verity and Rose Under Fire. Because Elizabeth Wein impressed me so much with Code Name Verity, I had no scruples about starting another World War II book that doesn't have anything to do with falling in love--yet everything to do with falling in love.

The secondary characters felt just as real as Rose, our MC, and I absolutely fell in love with this family of characters. I also really enjoyed how Elizabeth Wein weaved Maddie into this story as well so that we got to see how Maddie has turned out, where she is, how she's coping with her losses and moving on, etc. The other cast of characters: Roz'a, Lissett, Karolina, Irina, Anna, Elodie...they all touched my heart so deeply. Perhaps even more so because Elizabeth Wein shares in the Afterword how much of Rose Under Fire is based off of actual survivor accounts.

Like Code Name Verity, Rose Under Fire takes on the narration style of the main character writing in her journal. There is stream of consciousness, and it fits the purpose of this story so well. No other style would compliment this story in the same way.

I loved the differences from Code Name Verity to Rose Under Fire, but I won't discuss those in detail because I don't want to ruin the plot at all. There were multiple moments where entire passages would bring chills over me, and I found myself highlighting huge chunks of paragraphs and pages in my Kindle instead of solitary sentences. Elizabeth Wein did a great job of moving me throughout the book and through such a wide range of emotions. I can't imagine how emotionally connected to the stories she's created with both Code Name Verity and Rose Under Fireshe is--but maybe even more so with Rose Under Fire.

I highly recommend both Code Name Verity and Rose Under Fire--even for those of you who don't get pulled in by the description of these two books. Code Name Verity would never have made my radar had it not been for raving reviews of other bloggers, and thus I would have missed out on Rose Under Fire as well. I can't help but give 5 Stars to Rose Under Fire for the wonderful writing style, brilliant characters that I dare you to try not to get attached to--characters that literally jump off the pages--and heart-wrenching emotion that will have you holding your breath and trying to hold back tears.

"It makes me angry. Why should it have to be like this, for all of us, all our generation? That the only way for a young couple to be together is to get married? No chance of honeymoon, no flowers or champange because the gardens are all full of cabbages and turnips and France is a war zone? No pretty silk dress unless someone manages to steal a parachute for you."

"The descrtruction we are heaping upon the German cities is unimaginable--it is shameful. It makes me feel ashamed to be one of the victors. And then we come across a row of railway wagons abandoned on a siding under the snow and packed with hundreds of frozen, emaciated bodies--hundreds of them, unexplained, some of them children--and I know that we must be the victors. Whatever the shame--whatever the cost."

"Suddenly, on the other side of the thin wooden barracks, an anonymous voice yelled out, "Viva la France!" Instantly there was dead silence. We were all frozen, holding our breaths, waiting for the lights to snap back on and the dogs to come back. But nothing happened, and after another tense moment, half a dozen other anonymous voices answered in defiance: "Viva la France! VIVE LA FRANCE!" Then another voice called out fiercely, in English, "God bless America!" It wasn't me. It wasn't Elodie. I don't know who it was. But it was a battle cry."

"Hope--you think of hope as a bright thing, a strong thing, sustaining. But it's not. It's the opposite. It's simply this: lumps of stale bread stuck down your shirt. Stale gray bread eked out with ground fish bones, which you won't eat because you're going to give it away, and maybe you'll get a message through to your friend. That's all you need."

5 Stars people! 5 Stars! 10 Stars...however many stars I can give! Have you read Rose Under Fire? What did you think? Let me know!

Email ThisBlogThis!Share to TwitterShare to FacebookShare to Pinterest
Labels: 5 Stars, ElizabethWein, HistoricalFiction, YA