From the Ashes - Frostbite 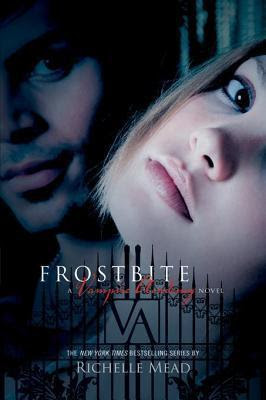 Goodreads description--Rose loves Dimitri, Dimitri might love Tasha, and Mason would die to be with Rose...

It’s winter break at St. Vladimir’s, but Rose is feeling anything but festive. A massive Strigoi attack has put the school on high alert, and now the Academy’s crawling with Guardians—including Rose’s hard-hitting mother, Janine Hathaway. And if hand-to-hand combat with her mom wasn’t bad enough, Rose’s tutor Dimitri has his eye on someone else, her friend Mason’s got a huge crush on her, and Rose keeps getting stuck in Lissa’s head while she’s making out with her boyfriend, Christian! The Strigoi are closing in, and the Academy’s not taking any risks... This year, St. Vlad’s annual holiday ski trip is mandatory.

But the glittering winter landscape and the posh Idaho resort only create the illusion of safety. When three friends run away in an offensive move against the deadly Strigoi, Rose must join forces with Christian to rescue them. But heroism rarely comes without a price...

*sigh* I still love these books. Frostbite has a kind of New Moon feel to it for me. It has at times been my least favorite book in the series as book 2's often are. But at the same time there's so much that happens in Frostbite that is pivotal to the overall story, to each individual character's growth, to moving the plot along, and to turning this into more than a cute vampire novel series. It's really the glue that binds the whole series together and completely sets the scene for book 3, Shadow Kiss, which is probably the most pivotal book in the series. The prologue does a great job of spelling out this fantastic world that Richelle Mead has created. I can't tell you how many friends that I've forced this series on who told me they were so thankful for the prologue because while they really enjoyed Vampire Academy, they were a bit confused. So if you were confused at all after finishing Vampire Academy, the prologue breaks everything down quite nicely.

I just love Rose. She's such a strong character. She's impulsive and rash, but she's so passionate and loyal. Rose is stuck in this place where she can't really talk to anyone about what all she's feeling. She hasn't had a chance to really tell Lissa about her feelings for Dimitri and what has gone down between them--especially because Lissa has been pretty wrapped up in her new relationship with Christian. It's completely real to see Lissa and Rose drift apart during this time period as friendships often do when one friend has started a new relationship. Rose starts off Frostbite being extremely naive and even bordering on childish and immature, but she grows so, so much in this book. She sees death in all of it's brutal and ugly glory which forces her to grow up. She learns that she's not invincible and neither are like heroic figures like Arthur Showenberg. As always, Dimitri has a way of putting her in her place without making her feel like complete and utter crap--even when she deserves it.

Speaking of Dimitri, it sometimes surprises me how childish Rose can act and yet it doesn't really change the way he feels about her. Dimitri still plays the wise mentor, but Rose continues to see him for what and who he really is thus shaking him to his core. He tries to remain in control at all times, but some things are just beyond being controlled. Rose being one of those things, and his feelings for her being another. However, Dimitri is presented with another potential suitor and decisions must be made about what he'll do with his life and if he'll follow this new path set before him--one that's not restricted and won't put anyone in danger for pursuing.

I've always been impressed with the foreshadowing that Richelle Mead uses in this series. And things really begin to pick up in Frostbite as far as that's concerned. We've got stuff going on with the bond, false ideas, changing politics, and all kinds of things that are really eluded to in Frostbite that, again, without knowing the rest of the series a reader would easily miss. Going back through the series is really the only way to completely pick up on all of this stuff, and even after as many times as I've read this series, I still find something new each time. Specifically I love how Richelle Mead will tell the reader something that the character believes is fact. Because the character believes these things as fact, the reader takes them as fact as well. It's a great way to lay down the groundwork for some false ideas that will turn into plot twists and such in the later books. But how do you tell fact from fiction without knowing the ending? Ha! I love it!

Along with Rose and Dimitri--my favorite characters--we have the same secondary characters as before, Lissa and Christian (Lissa and Christian are probably main characters, but for me they're secondary), Mia, Mason, and with the addition of a few more, Rose's mom, Adrian--oh Adrian!--Eddie, who's mentioned in the first book, but doesn't have a large role, Tasha, etc. The secondary characters continue to grow, and the new additions shine. Eddie's character is so different from Frostbite to the end of the series that with this re-read I almost didn't recognize him. He seems like a totally different person. Obviously Rose and her mom have issues and seeing that relationship play out was interesting. Nothing brings out Rose's childish side like her mother. Lissa begins to step up and come into her own with the other royals. She's able to discuss Moroi politics with them on a level that serves as mediator and peacemaker during a few of the meetings which is a huge step up from the girl we saw in Vampire Academy.

I keep thinking that Adrian has blonde hair, but Frostbite clearly states that he's a brunette. (Is it okay to call a guy a brunette?) I love how Adrian immediately picks Rose out yet throughout Frostbite during my first reading of it, I was so distraught that he might actually be going after Lissa too since he does seem to be a player. Not that I wanted him to go stepping in between Rose and Dimitri either. But I seriously couldn't help but fall for Adrian's charm--even early on.

The ending was one of those that had my heart pounding. Do you remember that feeling of playing hide-and-seek when you were little and just sitting in the dark trying to be utterly silent so as to not give away your position but feeling the increased steady drum of your heart? I totally felt this exact way reading the ending of Frostbite. This ending was so brilliant because it's such a pinnacle point for so many of the characters, specifically Rose, Mia, Eddie, Christian, Mason, Dimitri, Rose's mom. It was the humbling experience that Rose needed and turned the series from cute vampire series to something a bit more serious. I loved how resolution doesn't come easy to Rose. She doesn't just miraculously get out of this dangerous situation, she has to fight her way out, and every single moment of that fight is tough and difficult.

Frostbite easily gets 4 Stars from me. I still adore this book and this series. Have you read Frostbite? What did you think? Let me know!