This Song Will Save Your Life - Review 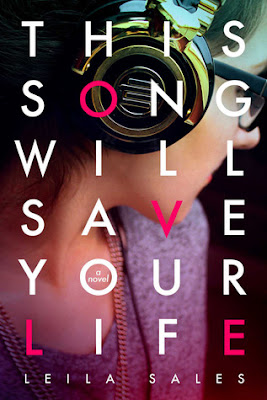 This Song Will Save Your Life

Goodreads description--Making friends has never been Elise Dembowski’s strong suit. All throughout her life, she’s been the butt of every joke and the outsider in every conversation. When a final attempt at popularity fails, Elise nearly gives up. Then she stumbles upon a warehouse party where she meets Vicky, a girl in a band who accepts her; Char, a cute, yet mysterious disc jockey; Pippa, a carefree spirit from England; and most importantly, a love for DJing.

Told in a refreshingly genuine and laugh-out-loud funny voice, THIS SONG WILL SAVE YOUR LIFE is an exuberant novel about identity, friendship, and the power of music to bring people together.

So I've got some mixed emotions about This Song Will Save Your Life. I really struggled with Elise's character in the beginning. I can't tell you (well...if you read my blog then you've seen me talk about this frequently anyway) HOW OVER THE BULLYING TOPIC I AM! Seriously! Done! And Elise's attitude toward her situation in life was just hard for me to comprehend and push through. Some of it I even found slightly unbelievable.

pg 8 "I shaved my legs, which is something I didn't know you were supposed to do until an ill-fated all-class pool party at the end of the eighth grade."

I mean I get that Leila Sales was trying to establish the fact that Elise doesn't really have any friends and maybe this is the kind of thing that you learn from friends, but Elise isn't living under a rock. Not to mention that she does have a mom. I just find it hard to believe that she wouldn't have known about this for so long. I was begging my mom to let me start shaving at eleven. And this isn't an isolated quote I picked out. This type of thing was throughout the beginning of the book.

Elise hasn't had friends. She's been bullied. She looks around her and sees what she thinks is how good everyone else has it. Others have friends. Others do the bullying and the putting down. "That girl" wears all the right clothes and says the right things. Surely all of these people are completely happy with their lives. But that's just not the way it works. You never know someone else's story. You can see what shows up on the outside, but you don't ever know how they feel on the inside until you spend some time with them and talk. And even then they might only be letting you see what they want you to see. Elise does learn this lesson among many others, and I'm glad that I pushed through my struggles with her initial attitude and negative self-talk.

This Song Will Save Your Life is a coming of age story. It's a story about a girl who finds her place in the world. She finds friends. She finds something that she truly loves to do. She learns about herself and life and love. And it's a story about how music connects us all. Music was a big instrument that contributed to my relationship with Husband, and it just has this way of making connections. For that reason, stories that include music in this way, like This Song Will Save Your Life, have a soft spot in my heart.

The secondary characters were similar for me in that I struggled with some and not as much with others. I felt nothing but bad for Amelia. She was put in an awfully uncomfortable situation and did the very best that she could do with the information she was given. I like how Elise wanted so much more out of Char, but that's the nature of life and not-quite-love. Pippa was a truly flawed character, repeating her mistakes time and time again. I can't say I liked her, but I did like that she was real. I loved Vicky, and I wanted more of Harry. Even Elise's family members were memorable.

More than anything, I enjoyed how much Elise grew as a character throughout this story. It wasn't always rainbows and cotton candy getting there, but neither is real life. If she hadn't moved passed where we started the story, I completely would have felt like I wasted my time reading this one, but that's not the case.

pg 238 - But power was not friendship. All these people were not my friends.

Small spoiler alert for the next two quotes...
pg 248 - I wanted to DJ my party tonight. Not to prove Char wrong, not to put Emily and her friends on the guest list, not for anything like that. Simply because Alex deserved to be the best that she could be. And I did too.

pg 273 - You think it's easy to change yourself. You think it's so easy, but it's not. True things don't stay the same forever: couches are replaced, boys leave, you discover a song, your body becomes forever scarred. And with each of these moments you change and change again, your true self shining, shifting positions--but always at least it returns to you, like a dancer on the floor. Because throughout it all, you are still, always, you: beautiful and bruised, known and unknowable. And isn't that--just you--enough?

Email ThisBlogThis!Share to TwitterShare to FacebookShare to Pinterest
Labels: 3.5 Stars, bullying, Contemporary, Leila Sales, This Song Will Save Your Life, YA