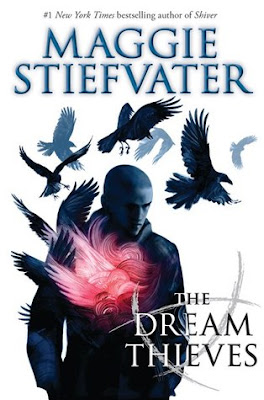 The Dream Thieves (The Raven Cycle, # 2)

Now that the ley lines around Cabeswater have been woken, nothing for Ronan, Gansey, Blue, and Adam will be the same. Ronan, for one, is falling more and more deeply into his dreams, and his dreams are intruding more and more into waking life. Meanwhile, some very sinister people are looking for some of the same pieces of the Cabeswater puzzle that Gansey is after...

Oh guys. *deep sigh* I didn't love The Raven Boys right? (Here's my review for that.) But the lowdown was that I felt like it was missing all of things about Maggie Stiefvater's writing style that I loved reading The Wolves of Mercy Falls series. The Wolves of Mercy Falls has really strong characters and is completely character driven in plot. And it's utterly poetic and lyrical. The Raven Boys was more plot driven and was missing the poetry completely. So while I wanted to read The Dream Thieves, I wasn't all that excited about it until I came across this review by Heidi @ Bunbury in the Stacks. Granted I only read the part where she said The Dream Thieves has everything The Raven Boys was missing and I saw that she rated it as 5 stars on Goodreads, but I didn't read the rest of the review because I didn't want my opinion affected by hers.

So I start up The Dream Thieves expecting what I normally expect out of Maggie Stiefvater--brilliance and a flowing, poetic way with words. Well for one, I had forgotten a good bit of the details from The Raven Boys by the time I picked up The Dream Thieves so I started off a bit confused. Then I was just all around confused by the beginning. With the introduction to the Gray Man as a narrator, but really no introduction to him at all. It literally took me until 50% of the way through the book to feel invested and fully interested in the story. And up until this point the writing felt a bit "klunky." It was still poetic, but not in a free flowing, lyrical way. More in an "I'm really having to think about what's being said" kind of way. As I progressed through the book, this got better for me, and I didn't have to think as hard to follow what was happening.

Ronan is such an integral part of The Dream Thieves whereas he wasn't focused upon as much in The Raven Boys. I really enjoyed him being more front and center. I actually struggle with Adam as a character. In a lot of ways, I feel sorry for him. He's had a rough life, and I know there are so many people out there who have been where he's been. But he also has a crap attitude, and I feel like he makes himself weak. It was good to see what character growth he goes through in The Dream Thieves. Gansey takes a much more backseat kind of role in The Dream Thieves as does his search for Glendower, but I absolutely loved him in this book. And then of course there's Blue. Blue also takes more of a secondary kind of role, but as with Gansey, I think I liked her much more in The Dream Thieves than in The Raven Boys. And I completely love the changes that are happening between Blue, Adam, and Gansey.

Our secondary characters make more of an appearance. Blue's mother Maura is developing "something" with the Gray Man. And Persephone's really crucial to Adam's character growth. Obviously as I already mentioned, the Gray Man himself--there's so much going on there. Can I just stop and mention that I thought Blue's family accepted the fact that he's a hit man a whole lot easier than anyone should ever accept such a fact. I mean how many conversations begin with "I'm a hit man," and end with "let's make out,"? Ok, poor example. But you get the point.

The Dream Thieves is told by varying points of view. You're never really quite sure who's going to take on the role next. From Blue, Adam, Ronan, Gansey, and even the Gray Man himself. In some aspects I think writing this way must be difficult because the author must fully understand the minds of each character, but from a reading standpoint, sometimes these multiple POVs make it a little more difficult to connect to our main characters because we don't stay with them for the entire length of the book.

All in all, I did enjoy The Dream Thieves once I made it past 50% and I got really excited about a scene around the 84% mark. I definitely enjoyed this installment much better than The Raven Boys, and I will most definitely pick up book 3 whenever the time comes. I'd give The Dream Thieves a solid 3.5 to 3.8 stars. I think Maggie Stiefvater's work is brilliant when I really break it down, but this one was not "easy" to muddle through. The extremely slow beginning has me unable to give this a full 4 stars. Have you read The Dream Thieves? What did you think? Let me know!

By the way, did you guys hear, Maggie S. is writing a standalone companion to The Wolves of Mercy Falls about Cole and Isabel? You have no idea how happy this makes me. Book one is called Sinner! YAY!