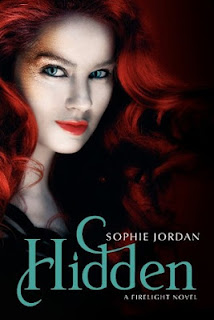 Goodreads description--Jacinda was supposed to bond with Cassian, the "prince" of their pride. But she resisted long before she fell in love with Will—a human and, worse, a hunter. When she ran away with Will, it ended in disaster, with Cassian's sister, Miram, captured. Weighed down by guilt, Jacinda knows she must rescue her to set things right. Yet to do so she will have to venture deep into the heart of enemy territory.

The only way Jacinda can reach Miram is by posing as a prisoner herself, though once she assumes that disguise, things quickly spiral out of her control. As she learns more about her captors, she realizes that even if Will and Cassian can carry out their part of the plan, there's no guarantee they'll all make it out alive. But what Jacinda never could have foreseen is that escaping would be only the beginning....

Loyalties are tested and sacrifices made in the explosive conclusion to Sophie Jordan's Firelight trilogy.

I finally got to finish up the Firelight series and lovely world of dragons that Sophie Jordan has created. Vanish left off pretty much right BEFORE a cliffhanger, so Hidden really jumped right into the action.

Normally when I'm reading a book, if there's a love triangle then I try to pick up on how the main character really feels. And whoever the MC is truly in love with is the one I'm rooting for, but guys I don't know why I'm so resistant with this series. It's OBVIOUS who Jacinda wants to be with and who she loves. In book 1, I was all about following that, but book 2 totally changed my mind. In the end I stuck with wanting who I was rooting for in book 2 to be victorious, but it was like watching a train wreck because I knew she was dead set on choosing the other guy. I blame it on the dern mythical bonding. I have a hard time fighting against these types of aspects in paranormal and fantasy novels.

This cast of draki characters is so interesting to me. I love how each draki falls into a category that has it's own abilities. Each one is fascinating. I can't help but try to picture these creatures as Sophie Jordan describes them and they are truly beautiful in my mind, but I guess the pictures I developed and what she sees in her heard aren't the same thing. Sometimes she would describe a physical characteristic of a particular draki and I'm like "wait a minute...how does that translate?" For instance, them having hair.I just can't picture any type of dragon I'm really used to seeing with hair. And fingers--claws maybe--but Sophie Jordan specifically uses the word "fingers." I don't know. I'd really like to see this series translated to film just so I can see what other people interpret these creatures to look like.

I enjoyed the addition of Deghan and the building relationship between him and Tamra, but I wish we'd gotten a little more of that. I also felt like what's going on with Will was not flushed out as much as I'd like. I mean, I remember finding out about the experiments that have been done to him discussed in the previous books, and I suppose that's what's changed him, but I felt like we were left hanging just a bit concerning this aspect.

The pacing of Hidden was very much the same as Firelight and Vanish. I finished it in a day. All of these are fairly short books, but there's an almost frantic pacing to the books that kept me pressing on until I devoured the whole thing. And the writing is at times poetic which I'm finding that I truly appreciate more and more these days.

Hidden gets 4 stars from me. Have you read Hidden? What did you think? Let me know.