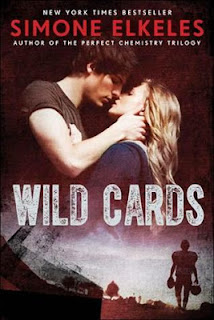 Goodreads description--After getting kicked out of boarding school, bad boy Derek Fitzpatrick has no choice but to live with his ditzy stepmother while his military dad is deployed. Things quickly go from bad to worse when he finds out she plans to move them back to her childhood home in Illinois. Derek’s counting the days before he can be on his own, and the last thing he needs is to get involved with someone else’s family drama.

Ashtyn Parker knows one thing for certain--people you care about leave without a backward glance. A football scholarship would finally give her the chance to leave. So she pours everything into winning a state championship, until her boyfriend and star quarterback betrays them all by joining their rival team. Ashtyn needs a new game plan, but it requires trusting Derek—someone she barely knows, someone born to break the rules. Is she willing to put her heart on the line to try and win it all?

When I saw in the description of Wild Cards that this book is about a girl who plays football, I almost checked out immediately. For one, I'm actually not a football fan so much. But this is such a unique concept in the world of YA literature that I figured it might be nice to give it a shot and read about something different. Surely the challenges facing a young girl who dreams of playing football for college can't be the same challenges facing the typical main character who's a senior in high school. And well...they're not.

Told from dual POVs, I connected with both Derek and Ashtyn pretty quickly. Derek is somewhat adrift in life with his mother having passed away a year or two back and his father being deployed in the military. He's just trying to find a distraction until he's old enough to be on his own. Ashtyn on the other hand is trying to get noticed--by her father, her sister, her nephew, her dog, her boyfriend, college scouts...whoever will pay her some attention. Ashtyn and Derek develop an easy, bantering relationship. They both pick on each other and drive each other bananas. But they both also know there's something more there. They both fight the relationship because Ashtyn thinks she knows that Derek will hurt her, and essentially Derek thinks he's leaving soon and he doesn't want to break her heart when he does.

I couldn't help but find some of Wild Cards cheesy. The writing had some parts that I felt like could have been polished some more, but I found there were some deeper messages about how our past scars us and our thinking and how to move past that. Lessons about what's worth fighting for and how love and life often change our plans for us. And how not to make the same mistakes twice. These parts were probably my favorite.

Overall I was pleased with Wild Cards and it turned out to be more than I was expecting. I'm giving Wild Cards 4 Stars. Have you read Wild Cards? What did you think? Let me know!