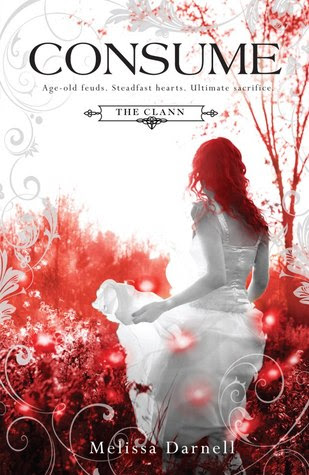 Goodreads description--These violent delights have violent ends And in their triumph die, like fire and powder,

Which, as they kiss, consume.

Tristan Coleman has survived the change from Clann magic user to vampire, much to Savannah Colbert's joy—and despair. By changing the Clann's golden boy and newly elected leader, even to save him from death, she has unleashed a fury of hatred and fear that they cannot escape.

As the Clann and the vampire council go to war, Tristan and Sav face a new threat—a fracturing of the all-consuming bond they share. To fight for peace, they must forge a new trust and risk everything to take down their deadliest enemy, even as they must run for their lives. Soon they will learn that some bonds are stronger than love—and some battles cannot be won without sacrifice.

Before writing this review for Consume, I went back and re-read my reviews for both Crave, book 1, and Covet, book 2. Obviously I stuck to my word in my review of Covet and did request Consume when it became available on NetGalley, but as with my feelings after reading Crave, I just really wasn't all that excited about picking up Consume to begin reading it. I think I requested it more out of my compulsive need to finish what I've started rather than from a real desire to know what happens next. But I did pick it up. And I did read it. And it was a mediocre read for me, making the series overall just that--mediocre.

In the beginning of Consume we have Tristan as a newly turned vampire. And there was a lot of frustration that came from the beginning of the book for me. But luckily, Tristan got his memory back fairly early on in the beginning and that helped move the story along for me.

I said in one of my reviews for the two previous books (I can't remember which one and too lazy to look again) that there were several Twilight-esque moments, and well there was more of the same in Consume. Particularly having to do with a newly turned vampire and an almost unfortunate hunter in the woods.

One of my biggest frustrations with this series, though I haven't mentioned it in the other reviews, is the language/terminology used. Ex: "gaze daze," "Sav," "sis," & "vamp blur." I think "gaze daze" and "vamp blur" are self-explanatory. As for "sis," do people really talk that way--calling each other "sis" and "bro?" No one I know talks that way. And "Sav" short for Savannah, just sounds like "salve" in my head. Maybe it's the Southern in me that's pronouncing one or both of those wrong, but that's all I could think about anytime someone (usually Tristian) said "Sav." I just found this type of dialogue/terminology too cheesy.

Another frustration was that this series seemed to be too "pretty" or too "sculpted." Like the events took place just to move the story along even when actions were out of character. Like Savannah's mom being against a plan of action because it would put Savannah in danger, but then she's all like "well I'm coming along just to make sure Savannah is safe." *Spoiler alert* And how about when Tristan wants to kill a particular character in the book who murders his mom, and Savannah's all like "Now Tristan, that would be murder. You couldn't possibly want to murder this person because that would make you a monster. You've got to be the bigger person and forgive and forget." Tristan sees the light and backs off. Then said character decides to kidnap Savannah's friends and all of a sudden Savannah jumps on the "Tristan you were right! That character must die because he kidnapped my friends." I mean kidnapping and murder aren't exactly in the same league, though both are horrible. How about let's take a little of our own advice, huh? *Spoiler Over* In the same way, because the characters are on the run for the majority of this book, they're all like "We must flee to somewhere safe." Then they get ten miles down the road and say "Well crap we must go back!" This happened multiple times. And finally, while I'm ranting on and on about my frustrations, how about when they go looking for a certain thing that they need, it's just coincidentally right where the second place they think to look? (Trying to be vague here since I already had one spoiler.) But it would have been more believable to me had the thing been in the first place they looked. You really just have to read the book to get what I'm talking about.

As you can see, I had some frustrations with Consume (and with this series as a whole). But I will say that Consume was a fast and easy read for me. Though I was rolling my eyes a lot, it wasn't hard to keep reading.

Consume gets 3 stars from me. It was a little too "pretty." The Clann series as a whole also gets 3 stars. That's the best I can do. Have you read Consume? What did you think? Let me know!