From the Ashes: Shadow Kiss

You can see my From the Ashes reviews of Vampire Academy here and Frostbite here. 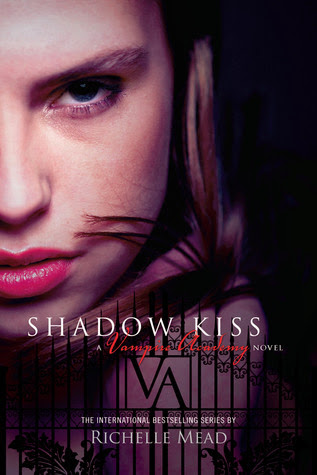 Goodreads description--It's springtime at St. Vladimir's Academy, and Rose Hathaway is this close to graduation. Since making her first Strigoi kills, Rose hasn't been feeling quite right. She's having dark thoughts, behaving erratically, and worst of all... might be seeing ghosts.

As Rose questions her sanity, new complications arise. Lissa has begun experimenting with her magic once more, their enemy Victor Dashkov might be set free, and Rose's forbidden relationship with Dimitri is starting to heat up again. But when a deadly threat no one saw coming changes their entire world, Rose must put her own life on the line - and choose between the two people she loves most.

Richelle Mead starts Shadow Kiss off with this opening scene that has you going "wow that's progressing fast," and "is this really happening," to "oh my goodness how embarrassing," and "poor Rose." And then you just end up laughing out loud--or I do anyway. This scene is the perfect way to set the tone for this book. Rose is so in her face, forcefully shown everything she wants, but can't have and I feel so bad for her. Still reeling from Mason's death, Rose is in an emotionally vulnerable place when we start Shadow Kiss.

A large portion of Vampire Academy is centered around Rose's training to become a guardian--Lissa's guardian. So I loved the concept of the field tests that Richelle Mead adds in as part of the novices' school curriculum. It's brilliant. But the setup and execution for the field tests doesn't really go as Rose expects it to. Rose, of course, has no issues in letting the authorities know how she feels about it all, but the guardians have good reason for making the decisions they have and Rose eventually comes to see the logic behind all of that. I just love how typical Rose handles all of this with her snarky, smart mouth.

Richelle Mead cuts this book with plenty of sarcasm and snarky, witty comments. Rose and Adrian continue to banter back and forth as well as Rose and Christian. I just love it. And considering how heavy the ending of this book is, the beginning needed all the lightness it could get from the jokes and laugh out loud moments.

Despite the letdown of hopes from the opening scene, Rose and Dimitri do continue to grow closer throughout Shadow Kiss. Dimitri's ability to predict Rose's behavior with the field experience setup, Dimitri volunteering to help with Rose's community service just to spend time with her, his protectiveness over her with Victor and the trial, telling her to wear her hair up for the trial, I could go on and on. Either way, the moments between them continue to build faith in each other, trust, tension, affection, all of the things that are necessary to make up truly epic love. Can I just say "fight scene" and "the cabin?" Those who have read this series will know what I mean. EEEE! *giggles like a little girl*

The other characters continue to grow as well. Lissa is showing herself to be more confident and comfortable in her abilities, herself, and in her opinions. Christian continues to press for what he believes in--though he does have a stint of jealousy throughout the book. Adrian grows more in his abilities, but his presence and the importance of having him around grows as well. Eddie is an almost completely changed character from where he was in the first two books. Being extremely affected by the death of Mason, his best friend, in Frostbite, Eddie can't help but take life and his job as a guardian seriously since he's seen first hand the hand of the enemy.

As I've said in both of my reviews of Vampire Academy and Frostbite, Richelle Mead continues to astound me with her level of foreshadowing. I've said before that good foreshadowing is a fine line between spelling out what's coming and hinting without the reader even knowing that's what the author is doing. Richelle Mead is a master. I wish I could tell you all of the places that I've found it, but most of them are spoilers for what's to come--obviously. But the fact that Richelle Mead is so good at placing these clues and phrases throughout this series makes Vampire Academy worthy to be read and re-read over and over again in my opinion. I love being able to see all of the pieces that she revealed throughout the series. Mind-blowing. Shoot, there's even one comment in Shadow Kiss that I don't know that Richelle Mead intended, but foreshadows some plot aspects in the Bloodlines series.

We find out more about what it means to be "shadow kissed" which makes sense considering that's essentially the title of this one. This would have been spoilerish for Frostbite, but once you know what's going on between the bond and Lissa and Rose with the shadow kissed business, some of Rose's behavior in Frostbite makes even more sense.

While all of Shadow Kiss is pretty stinking good, the best of the book is found in the last section really. From the "cabin scene" on things progress very quickly. I don't want to give away anything that happens, but be warned that there is quite the cliffhanger. Lucky for those of you who might not have read the Vampire Academy series yet, all of the books in this series are already published and you should be able to move straight from Shadow Kiss into Blood Promise. I will advise that you will probably want to do just that with the cliffhanger ending of Shadow Kiss. Some of us had to wait like 9 months or so after finishing Shadow Kiss before we could read Blood Promise. I still get chills reading the entire last portion of this book. I wish I could do some quotes from this section or even just talk about it, but I just can't spoil anything for you. It's too major.