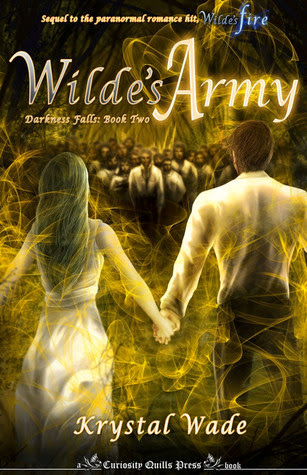 *Note: The above links to Amazon, Book Depository, and Booksamillion.com area affiliate links. Affiliate links support giveaways for Somewhere Only We Know readers.

Goodreads description--"Hello, Katriona." Those two words spark fear in Katriona Wilde and give way to an unlikely partnership with Perth, the man she's been traded to marry for a favor. Saving her true love and protector Arland, her family, and their soldiers keeps her motivated, but the at-odds duo soon realizes trust is something that comes and goes with each breath of Encardia's rotting, stagnant air. The moment when concern for her missing sister spirals out of control, all thoughts of trust are pushed aside and she finds herself trapped by the daemon tricks Perth warned her of. However, rescuing those she loves is only half the problem. Kate still must get to Willow Falls, unite her clashing people, and form an army prepared to fight in order to defeat Darkness. When so many she's grown fond of die along the journey, her ability to play by the gods' rules is tested. How will she make allies when the world appears stacked against her? And will she still be Katriona Wilde, the girl with fire?

I never should have requested Wilde's Army for review. Wilde's Fire was better than I was expecting; however, between the writing and the ending of Wilde's Fire, I just wasn't excited at all about starting Wilde's Army. When I saw Wilde's Army available on NetGalley for review I requested it without thinking much because I had not yet broken my obsessive need to "complete" things--in this case this series. But since requesting Wilde's Army, I've made much progress in being able to let go of this obsession. Time is too short.

I did indeed start Wilde's Army. And I did press on to try to complete it. I made it to 20% which translates into roughly 70 pages. I know that's not very far into the book, but you have to considering that I've already read 390+ pages in this series and by this author. I feel completely comfortable with the effort I've put in to Wilde's Army.

The same struggles I had with Wilde's Fire were there and more in Wilde's Army. Kate's 20 years old, but she behaves and speaks much younger. Where Kate's sister, Brit, seemed more mature than Kate in Wilde's Fire, I didn't really feel like that was the case thus far in Wilde's Army. I still don't like the alternate dimensions aspect of this series, but this was less of an issue in the 20% of Wilde's Army that I've read since there's really no travelling back and forth in this portion of the series. My other general complaint of Wilde's Fire was just that the book was mainly average. However, I've read some truly stellar books this year, and I don't feel like this series or the writing measures up to the level of these other books.

A new struggle for me in Wilde's Army--or at least I didn't point this out before--is the dialogue. The characters repeatedly call each other by name. While I've definitely noticed that a lot of books do this more than people use each others' names in real life, Wilde's Army goes beyond this to the point of being really awkward, making the dialogue feel forced. Specifically in Wilde's Army there's a section where one character says, (paraphrasing) "We can't stay here long. It's dangerous." But then the group proceeds to have a discussion right there that lasts like 10 pages, and another character interrupts and says, "We can discuss this later. We really need to leave this place." The dialogue and decisions made by the characters feels forced and awkward.

I intended to continue trying to push through this book, even if I had to do it 5 pages at the time, but I've come to a place in my reading life where I just don't want to do this. I want to read for fun--always. Someone else may be in love this series. I'm sure it's the perfect fit for someone out there--perhaps a younger readers--but that someone just isn't me.

I don't rate my DNFs, but what do you think? Have you read Wilde's Army? Is this one I should consider picking back up later? Does the ending make up for the rest of the flaws? Let me know!