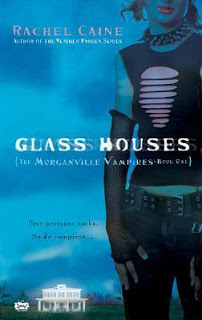 Goodreads description--From the author of the popular Weather Warden series comes the debut of an exciting new series set in Morganville, Texas, where you would be well advised to avoid being out after dark.

College freshman Claire Danvers has had enough of her nightmarish dorm situation. When Claire heads off-campus, the imposing old house where she finds a room may not be much better. Her new roommates don't show many signs of life, but they'll have Claire's back when the town's deepest secrets come crawling out, hungry for fresh blood.

I've had the Morganville Vampires series on my TBR list for quite some time. It's popped up as recommended to me by Amazon and loads of other places. I've seen people who say these books are really good and even funny. So when I saw that my local library had Glass Houses on audiobook, I jumped on the opportunity to check it out.

Audiobooks can be a hit or miss for me with the narration. When I first started listening to Glass Houses, the narrator (Cynthia Holloway) totally wasn't doing it for me. She was fairly monotone and I found myself spacing out too easily. I got a good twenty minutes in before I realized that I hadn't heard anything that she said and I had to start over. I think once the story finally hooked me, it was easier to ignore the less than stellar narrator and get into the book itself.

Claire is a fairly likable character. She unknowingly moves to a town that is pretty much run by vampires in order to attend college early. Most of the residents are aware of the vampire world around them and have sought out protection from those vampires. Claire, however, is pretty much oblivious to what's going on around her until she moves out of the dorm she lives in and moves into a house with a ragtag group of characters a couple of years older than her.

Claire's roommates were an interesting bunch of characters. Eve who taunts the vampires by dressing gothic. Michael who has a secret that only Claire knows. And Shane who's haunted by the fact that his sister was murdered by the hands of these creatures and the humans under their protection. This group accepts Claire into their house at differing rates and for different reasons, but they all become her family.

Overall, I didn't particularly see anything about Glass Houses that blew me away. It was a pretty average read for me in all aspects. I had parts that I dreaded putting it down and therefore was excited when I was allowed to return to it. But I didn't rush through it. The characters were interesting, but not on the level of others that I've read. The plot was decent, but at this point in my reading experiences, nothing new. I do plan to continue reading the series in order to see where things go and hopefully to come across some of this humor that I've heard talked about concerning the series which I found absent from Glass Houses.

I'll give Glass Houses 3 Stars. Have you read it? What did you think? Let me know!