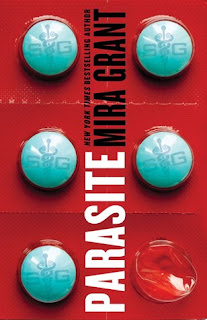 Goodreads description--A decade in the future, humanity thrives in the absence of sickness and disease.

We owe our good health to a humble parasite - a genetically engineered tapeworm developed by the pioneering SymboGen Corporation. When implanted, the tapeworm protects us from illness, boosts our immune system - even secretes designer drugs. It's been successful beyond the scientists' wildest dreams. Now, years on, almost every human being has a SymboGen tapeworm living within them.

But these parasites are getting restless. They want their own lives...and will do anything to get them.

I have to say that the concept for Parasite is one of my worst nightmares. As a child, I remember hearing about tapeworms and being utterly terrified. The idea that humanity would begin purposefully ingesting tapeworms for medical reasons is literally a scene out of my nightmares. Although, it's not like tapeworms haven't been marketed to human beings before--for dieting reasons.

Because Parasite is so long, it felt like it took me forever to read it. I think this is where physical book copies come in handy. Knowing I've read 50 pages in a book is a lot more motivating than only seeing 10% move in my progress bar on my kindle.

The description above does a great job of giving an overview of the big picture without telling you anything about the characters involved in this story. Our main character is Sally who was involved in a car accident and was almost declared brain dead before she was implanted with her bio-engineered tapeworm. Her tapeworm saved her live and she has now become the poster child for the Intestinal Bodyguard and SymboGen, the company that created it.

However, all is not as it seems. That fact was easy to pick up on, but not so easy to nail down what was actually going on. About halfway through I felt like it became obvious to me what was going on with Sally, but the book doesn't spell it out until literally the last couple of pages. So the big revelation, or what should have been the cliffhanger, didn't feel like a big revelation or cliffhanger at all.

I've heard great things about Mira Grant's Newsflesh series and so I wanted to get hooked into this horrific world she's created where people purposefully ingest tapeworms, but something was just missing for me. The characters were okay. Minus Tansey. I think she was designed to be comedic relief maybe, but she just fell a little flat to me.

Truthfully, if book 2's description doesn't blow me away, I probably won't continue this series. I'm giving Parasite 3 Stars. Have you read Parasite? What did you think? Let me know.

Also, we've got the cliche gay character box check marked in this one as well. SURPRISE!