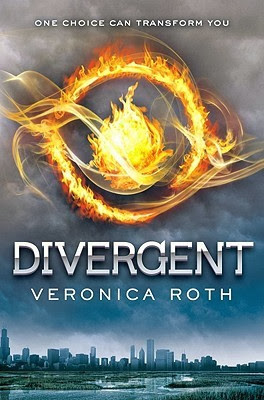 Goodreads description--In Beatrice Prior's dystopian Chicago, society is divided into five factions, each dedicated to the cultivation of a particular virtue—Candor (the honest), Abnegation (the selfless), Dauntless (the brave), Amity (the peaceful), and Erudite (the intelligent). On an appointed day of every year, all sixteen-year-olds must select the faction to which they will devote the rest of their lives. For Beatrice, the decision is between staying with her family and being who she really is—she can't have both. So she makes a choice that surprises everyone, including herself.

During the highly competitive initiation that follows, Beatrice renames herself Tris and struggles to determine who her friends really are—and where, exactly, a romance with a sometimes fascinating, sometimes infuriating boy fits into the life she's chosen. But Tris also has a secret, one she's kept hidden from everyone because she's been warned it can mean death. And as she discovers a growing conflict that threatens to unravel her seemingly perfect society, she also learns that her secret might help her save those she loves . . . or it might destroy her.

So this is my first "Upon Further Review" feature. I have a similar feature called "From the Ashes." From the Ashes is where I re-read books that I've not reviewed on Somewhere Only We Know before and finally review them. Upon Further Review is where I re-read books that I have reviewed here before and let you know whether my original rating stands or whether upon second (or third or fourth, etc) reading that rating needs to be "overturned." Also, if there's anything I left out of my original review that hit me during this read, I'll include that.

I've always been a "re-reader," but since starting my blog, I haven't wanted to "waste time" re-reading because I need to read new-to-me books. That's why I started these two features mentioned above. They both give me the flexibility to re-read while also providing content for Somewhere Only We Know.

After watching The Mortal Instruments: City of Bones and the Divergent teaser trailer, I got hit with this overwhelming desire to re-read both Divergent and The Hunger Games. These are both series that I've only read once but knew immediate would be worthy of multiple reads. But for some reason, I just couldn't get these two books out of my head. They're definitely similar. I think it's fair to say that fans of one of these series will have a high probability of enjoying the other series.

Through my re-reading of Divergent, I just knew that there had to have been stuff I left out of my original review. I made notes of page numbers and comments I wanted to make concerning Divergent, but when I went back and re-read my original review, I pretty much cover all of the same things that hit me during this past reading. Surprisingly so.

There are only a few things that I'll elaborate on. One is that I mentioned how Four forgets that Tris can be hurt because she appears to him to be so strong, so brave, so selfless. But Four really comes off as being aloof. He appears cold and callous for a while. While you can see the difference between Eric's style of "being Dauntless" and Four's, Four still has this very cold, you-must-prove-you-belong-here attitude that really comes through in his training of the initiates. Maybe that's really to protect them more than anything else because he's aware of some level of corruptness, but it's hard to tell. And truthfully, I like this demeanor about him. It serves as the foundation for my picture of him.

The other thing I wanted to mention is how much I enjoyed reading about the initiation process. Much more than the more political parts of the Divergent world. That's what fascinates me, and it's what makes Divergent so much better than Insurgent to me. Luckily, Veronica Roth spends the majority of Divergent exploring the initiation process for getting into the Dauntless faction, but I'd be really interested in seeing the initiation processes for the other factions as well. Specifically Candor's since that giant lie detector test was mentioned and we know it comes into play in Insurgent. Still, this is what interests me the most in this series, not the overall, bigger picture of the degradation of the faction system in their society. Not the political aspects of whether or not Abnegation is holding out luxuries from the rest of the factions or that all factions should be represented in their government. It's kind of the same way I feel about The Hunger Games series as a whole. I was really excited and interested in the aspects of the actual Games, but not so interested in the political, we're-going-to-fight-this-war-to-free-ourselves-from-corrupt-government aspects.

All in all, I think my final rating of Divergent as 4.7 Stars stands. I don't really do decimals other than .5 anymore, but in this case, it's deserved. Have you read or re-read Divergent? What did you think? What do you think about re-reads? Let me know!

Posted by Somewhere Only We Know at 5:14 PM