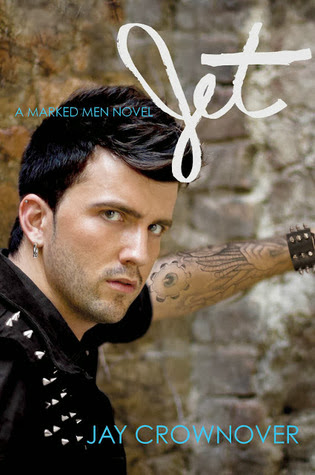 Goodreads description--With his tight leather pants and a sharp edge that makes him dangerous, Jet Keller is every girl’s rock and roll fantasy. But Ayden Cross is done walking on the wild side with bad boys. She doesn’t want to give in to the heat she sees in Jet’s dark, haunted eyes. She’s afraid of getting burned from the sparks of their spontaneous combustion, even as his touch sets her on fire.

Jet can’t resist the Southern Belle with mile-long legs in cowboy boots who defies his every expectation. Yet the closer he feels to Ayden, the less he seems to know her. While he’s tempted to get under her skin and undo her in every way, he knows firsthand what happens to two people with very different ideas about relationships.

Will the blaze burn into an enduring love. . . or will it consume their dreams and turn them to ashes?

Ah Jet! Jay Crownover hooked me again. AND I feel like her writing has improved from Rule to Jet. YAY!!!--not that it was bad before, I just like to see growth is all.

I knew that I would love Jet's story just from seeing the beginning of it weaved into Rule. Because Ayden was Shaw's best friend, I was able to get pretty attached to her through book 1 and I was so excited to see her story play out with Jet. When I first started Jet I was afraid that we would have too similar of a story arc because we've got a girl and a guy who have some tension that has been building for quite some time. Oh and said guy is a dirty slut, not shy about rubbing girl after girl into the one's face that he really wants. We definitely have those same things, but Jet was just different enough.

Jet and Ayden of course have their issues that make them unique from Shaw and Rule, and I like how Jay Crownover pulled their stories and backgrounds together, essentially building common ground for them. While Jet may not work a nine to five job like Ayden thinks she wants, I think Jet is a lot more stable and secure with his income and future than Ayden thinks. Jet and Ayden both are guilty of assuming that what they see on the surface is all that meets the eye and both are surprised to find how much more there is to the other than they originally saw.

I did want to smack Ayden around for taking on the self-sacrificing role and pushing Jet away instead of allowing him to not only be there for her when things got tough, but to help her through it all. But she's a quick learner. And I love how their story plays out.

Jet was a bit less graphic than Rule was and I'm thankful for that as my graphic tolerance isn't as high as some--plus any more graphic and I wouldn't feel comfortable reviewing this one on my blog as I didn't review Rule here. So thanks Jay Crownover for toning it down a bit.

As with Rule, this story surprised me with it's depth and complexity, and it stuck with me days after finishing it. I love seeing the growth in Jay Crownover's writing from book 1 to book 2. I think it's pretty evident. And I'm stoked about getting my hands on book 3, Rome. Jet gets 4 Stars from me. Have you read Jet? If so, what did you think? Let me know!