Crash Into You - Review 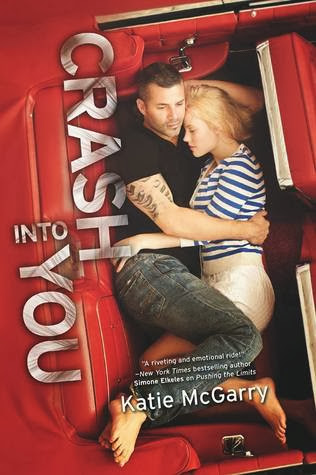 Crash Into You (Pushing the Limits, # 3)

Goodreads description--From acclaimed author Katie McGarry comes an explosive new tale of a good girl with a reckless streak, a street-smart guy with nothing to lose, and a romance forged in the fast lane

The girl with straight As, designer clothes and the perfect life-that's who people expect Rachel Young to be. So the private-school junior keeps secrets from her wealthy parents and overbearing brothers...and she's just added two more to the list. One involves racing strangers down dark country roads in her Mustang GT. The other? Seventeen-year-old Isaiah Walker-a guy she has no business even talking to. But when the foster kid with the tattoos and intense gray eyes comes to her rescue, she can't get him out of her mind.

Isaiah has secrets, too. About where he lives, and how he really feels about Rachel. The last thing he needs is to get tangled up with a rich girl who wants to slum it on the south side for kicks-no matter how angelic she might look.

But when their shared love of street racing puts both their lives in jeopardy, they have six weeks to come up with a way out. Six weeks to discover just how far they'll go to save each other.

I didn't really like Isaiah at all in Dare You To. At all. I thought he was a real jerk to Beth. And so on the one hand, I wasn't really looking forward to Isaiah's story. On the other hand, it's Katie-friggin-McGarry! It's going to be good. You know?

Crash Into You had me hooked from way early on--like 5 or 7% or something. I would have finished it within 24 hours if I wasn't forced to put it down due to real-life obligations.

I felt like these characters were so real--the situations they're in also. Rachel was born as a replacement daughter for the one her family lost to cancer. She's faced with the fact that she's not her dead sister. She's never going to be her dead sister. And no matter how hard she tries to be, she just ends up failing at this. I think this is such a real-life situation that I've not seen in the books that I usually read. Rachel is searching for someone to see and to love her for exactly who she is. And of course that's exactly what Isaiah does.

Isaiah...well he's the same way. He's been in the foster care system since he was six. He's never known who his father was. His mother is in jail. After being passed from home to home, he just wants someone to choose him. He wants to be worthy of being loved. And he doesn't want to be alone. He's found family in Noah, Echo, and at one time, Beth, but now Noah's in college. And with Echo, Noah seems to be starting his own family. He and Isaiah are still family...but it's just that things are changing.

I loved that in Crash Into You, Isaiah and Rachel weren't playing this game of denial with themselves or each other. They meet. They have a connection. They have some pretty intense moments with each other, and while everything isn't peachy all the time, they don't spend too much time fighting the fact that they like each other. That was so refreshing to me. Just openly admit that you like someone and see where it goes. No games of cat and mouse. And while Isaiah and Rachel both have issues that they need to work out, I liked how they handled each other and how the battles they were fighting (for the most part) weren't against each other. They were working as a team (again for the most part) against a common enemy/conflict.

The secondary characters are just as alive as Rachel and Isaiah. We see Noah and Echo--though not as much as I'd like. Even Beth and Ryan. But we've got Logan, who we met in Dare You To--Ryan's best friend. Abby who turns out is Isaiah's longest standing friendship. Can I just say that I loved her! She's so quirky. You never know what she's going to say. And I just adore how she attached herself to Rachel so quickly. And then there's Rachel's brothers, mostly Ethan and West, but also Gavin and Jack. I can't wait to read West's story, Take Me On, and I would love to read Logan and Ethan's as well. Abby too. Oh boy...Katie McGarry could be writing from different characters from this series for the rest of her career, and I'd be okay with that.

Memorable quote that's not spoilerish but isn't going to make any sense out of context:

"I now understand why so many deer are hit by cars." - Rachel

There were a couple of things that I noted as being too convenient. I think Katie McGarry skirted some issues and might have even been doing some back pedaling, but these weren't big enough to change my opinion of the overall story.

Crash Into You gets 4.5 Stars from me. I debated on giving it 5, but I've been stingy with the 5 Stars this year. I definitely enjoyed Crash Into You better than Dare You To, and possibly almost as much as Pushing the Limits. Great addition to the series. Have you read Crash Into You? What did you think? Let me know!