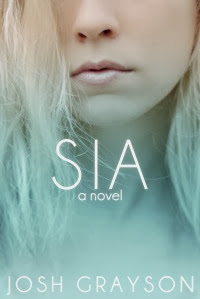 Source: Publisher/Author via NetGalley (Thank you!)

Goodreads description--When seventeen-year-old Sia wakes up on a park bench, she has no idea who or where she is. Yet after a week of being homeless, she’s reunited with her family. At school, she’s powerful and popular. At home, she’s wealthy beyond her dreams. But she quickly realizes her perfect life is a lie. Her family is falling apart and her friends are snobby, cruel and plastic. Worse yet, she discovers she was the cruelest one. Mortified by her past, she embarks on a journey of redemption and falls for Kyle, the “geek” she once tormented. Yet all the time she wonders if, when her memories return, she’ll become the bully she was before…and if she’ll lose Kyle.

I'm not sure there's much for me to say about Sia. I read it in less than 24 hours, which is a good thing for me. But that was partly because I had the opportunity to keep reading rather than being forced to put it down. Josh Grayson's writing style was easy enough to follow, but I thought lacked some maturity in the dialogue in some places and in continuity. Sadly, Sia isn't going to be a book that I remember much about in a year or two.

I typically like stories involving amnesia, but the concept is not totally original. As I said before, I struggled with continuity in some parts. Sia supposedly doesn't really remember anything about her life before waking up on that park bench, but she makes comments like "I'm happier now" and I just kept thinking "how would you know?". No surprise but the new Sia doesn't really like the old Sia--I get that. I'm fine with that. But don't act like you're happier now than you were before when you shouldn't even remember if you were happy before or not. Does that make sense?

Also, I found it typical that old Sia was queen-b of the school. She's wealthy. She's beautiful. She's head cheerleader dating the handsome quarterback who also happens to be an idiot. We had people who were more popular than others, but I swear my school just wasn't like that. So this repetitive theme in YA literature just confuses me.

New Sia develops a relationship with Kyle who the description above calls a "geek." The relationship wasn't really believable to me. It developed too quickly. Especially *spoiler alert* for them to be saying "I love you" by the end. Way too much, way too fast. *End spoiler* I could have bought that they were developing a relationship, but no way can I buy that they've made it to the level they claim.

There were some good life lessons discussed. My favorite being the quote about two friends walking separate paths but still remaining by each other's sides. I'm totally butchering that with my paraphrase, but that's a lesson I've definitely had to learn and haven't experienced for the last time either.

Sia was an "okay" read. I liked it enough, but it definitely has faults that keep it around the 2.5 Star level for me. Have you read Sia by Josh Grayson? If so, what did you think? Let me know!